Visiting the Tomb of King Tut is an experience like no other. Wherever you go in the world, you’re likely to find pictures and statues of Tutankhamen, so it’s hardly surprising that his tomb is so popular. Admission to this tomb is not included in our Egypt tour packages because admission tickets have to be purchased in person at the site.

Entrance of Tomb of King Tut in Valley of the Kings, Luxor.

If you mention to someone that you will be visiting KV62 while you’re in Egypt, the chances are they won’t have any idea what you are talking about. On the other hand, if you tell them you’ll be be visiting the Tomb of King Tut in the Valley of the Kings you’ll immediately see the envy in their eyes. Yes, I’m sure most will agree that KV62 is an incredibly unromantic name for what is perhaps the most famous of all the ancient Egyptian tombs, and certainly one of the most famous attractions in Luxor. 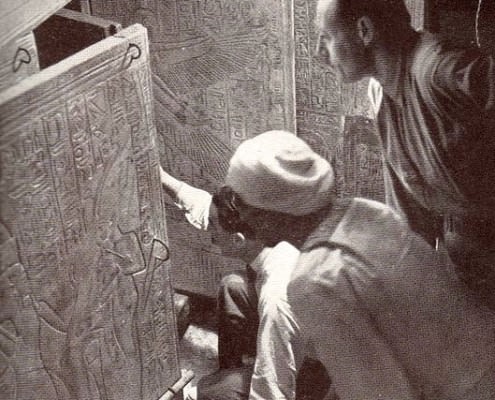 The boy king left so little information behind him when he died before the age of 20, that experts were not even sure he had a tomb. Nonetheless, in 1922 an Englishman by the name of Howard Carter did indeed find the Tomb of King Tut. In fact, when compared to many other tombs, it was considered to be in pristine condition, and gave the world a glimpse of the grandeur with which the Ancient Egyptians sent their dead into the afterlife.

Amazingly enough, it took Howard Carter more than seven years to empty the tomb completely. This of course was because he was cataloging and photographing each and every item discovered. Even though the tomb is completely empty today, with the exception of the pharaoh’s mummy which is still in its original sarcophagus, there is still a great deal to see.

The four rooms cut from the native bedrock are covered in their original murals and paintings, and the stone steps down which Carter climbed to enter the tomb are still in use. As already stated, the burial chamber does still contain the world’s most famous royal mummy.

There are questions about whether or not the tomb will remain open to the public. Up until 2007, it only cost visitors a small additional fee in order to be granted access to KV62 during Egypt guided tours of the Valley of the Kings. In 2010, on the other hand, the tomb was closed “indefinitely” by the Egyptian government because of the tremendous concerns relating to the potential impact of human visitors.

On any given day, the space will collect more than a pint of moisture from human perspiration, and this alone is causing the painted walls to peel and decay. Even one day after Carter’s team opened the tomb in 1922, the scientists indicated a radical change in the air quality, and spoke of their concerns.

In 2011 the tomb was reopened, along with plans for it to be closed again in late in 2013 for a five year restoration process. Because of the ongoing changes in Egypt, this may not be financially viable however. Any traveler hoping to step into the Tomb of King Tut will need to ensure that they will indeed have access when they arrive by checking with their tour guide in advance.

While a visit to the necropolis and to the tomb is included in almost all of our Nile River cruises, a separate admission ticket must be purchased at the sight by anyone wishing to enter the tomb.

EDIT (29/08/2021) – All restoration work has been completed and the tomb is now once again open to visitors.

If you are fortunate enough to be able to can see the interior of this amazingly well preserved tomb, it will be a real treat, bearing in mind that it might not be possible for very much longer. Practically all visitors to Egypt long to see King Tutankhamen’s tomb, and it will be a sad day when this is no longer possible.

The tomb is far from being the largest or grandest of the burial chambers which you can see in Egypt, but it is one in which the impressive artwork of the era can be seen and enjoyed for its stunning beauty. Most importantly of all, it is where the boy king was laid to rest.

Looking to Visit the Tomb of King Tutankhamen?

If you would like to visit the Tomb of King Tut, go explore our Egypt tour packages. Please note however that we cannot guarantee access to the tomb, although customer service department will be able to make inquiries on your behalf.