Welcome to the Grand Egyptian Museum, one of the latest additions to Egypt’s already infinite number of mind-blowing attractions. Also known as the Giza Museum, this sprawling complex is still a work in progress. At the time of writing this post (April 2018), the museum is still under construction. For this reason, you may not see it featured in our current range of Cairo tour packages.

The Grand Egyptian Museum (aka Giza Museum) is expected to open in 2018.

Once the Grand Egyptian Museum has been completed, it will be one of the top Cairo tourist attractions, and also one of the most impressive. It will cover an area of around 480,000 square meters (5,200,000 sq ft) which effectively means that it will be the biggest archeological museum in the world.

The museum will also house the entire collection of artifacts which were recovered from the tomb of King Tutankhamen. This will be the first time ever that the entire Tutankhamen collection has been on display simultaneously at a single venue.

Location of the Grand Egyptian Museum

The all new Giza Museum will be located on the outskirts of Cairo, on the Giza Plateau, approximately 2kms from one of Egypt’s most famous and most popular attractions, the Great Pyramids of Giza and the Sphinx. Interestingly, the museum’s north and south walls will be perfectly aligned with two of the three Giza Pyramids, the Great Pyramid of Khufu and the Pyramid of Menkaure.

What to Expect When You Visit 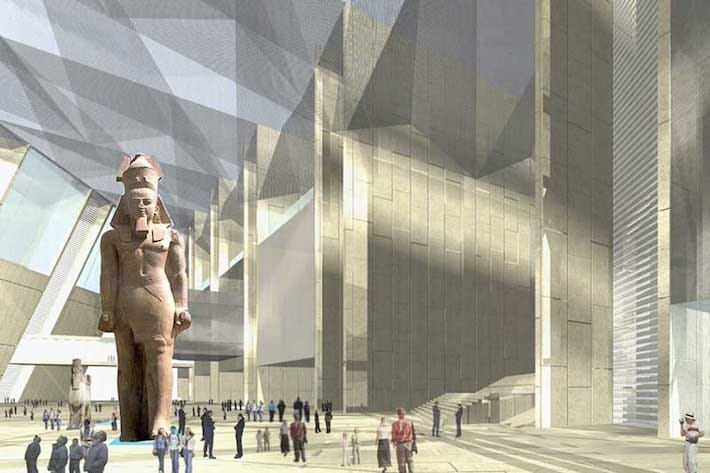 Plaza of the Grand Egyptian Museum.

Upon arrival at the new Giza Museum, visitors will first pass through a large plaza full of date plants before entering a large atrium where they will be greeted by several giant statues which will come from various sites around the country. The front façade of the building is an eye-catching translucent wall made from alabaster, and it is undeniably one of the building’s leading features.

The museum’s exhibition will occupy roughly a third of the site, and it will showcase an estimated 50,000 artifacts. The main attractions will of course be the exhibition of Tutankhamen’s “full tomb” collection which consists of about 5,000 individual items, many of which have never been on public display before.

Tutankhamen’s mummy will also be moved from his tomb in the Valley of Kings on Luxor’s West Bank to the all-new Grand Egyptian Museum. Two other small mummies that were discovered in his tomb will also be put on display as part of the King Tutankhamen exhibition. It is widely believed that these two small mummies are the mummies of two of his still-born children.

According to the authorities, those who visit the exhibition will feel as if they are actually a part of King Tutankhamen’s funeral procession. With one of the walls being made from glass, visitors will also be able to see the Great Pyramids in the background.

More than Only an Exhibition Center

In addition to being a world class museum, and the biggest museum in the world dedicated to a single society, the Giza Museum is also set to become an international hub for communications between museums all over the world. There will also be a world-class conference center on the site, along with a children’s museum; a training center; workshops and etc.

The Grand Egyptian Museum will also utilize various cutting edge technologies, including things such as virtual reality. There really is nothing modest about this museum, and no stone has been left un-turned.

How the Giza Museum Came to Be 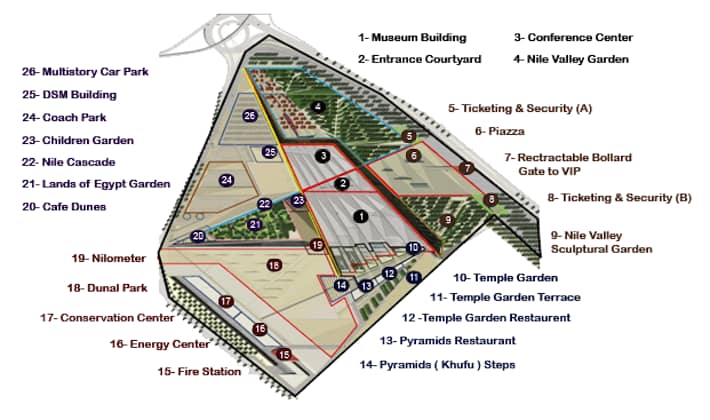 Plan of the Grand Egyptian Museum.

Once it had been decided that a new museum should be built, the authorities then decided to launch an architectural competition on the 7th of January, 2002 for the design of what was going to become the country flagship museum. This competition proved to be immensely successful, attracting 1,557 entries from a total of 82 different countries.

For the next stage of the competition, the list of entries was narrowed down to only 20, and the entrants were then asked to submit additional information and additional details. On the 2nd of June 2003, the winning prize of USD 250,000 was awarded to a Dublin based company by the name Heneghan Peng. The winning design means that the shape of the building will essentially be like that of a chamfered triangle.

Even though the foundation stone was laid in 2002, and a final design agreed on just a short while later, actual construction of the Grand Egyptian Museum only began on the 12th of March, 2012. In May 2015, Egypt’s minister of antiquities announced that there would be a partial opening in May 2018. 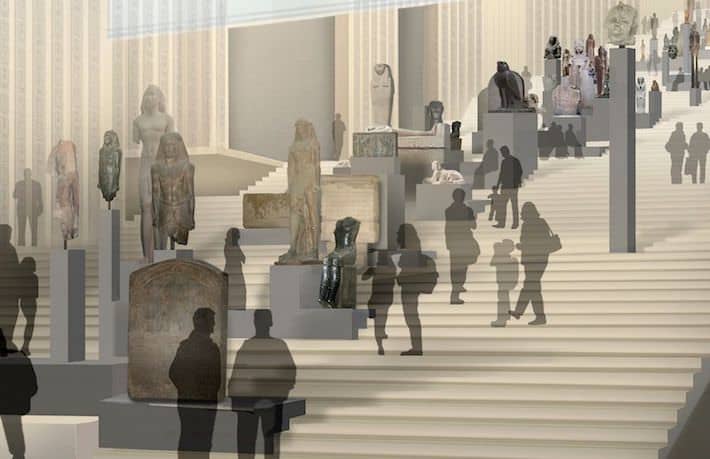 Stairs and artifacts on display in the museum.

Is there really a need for such a huge new museum? According to the director of the already famous Egyptian Museum in central Cairo, the answer is a very definite YES.

For the last 100 years, the old Egyptian museum in Cairo has done a wonderful job, but with new sites and new artifacts being discovered and recovered all the time, the museum has quite simply reached bursting point.

While there are roughly 160,000 items on display in the old museum, more than 100,000 other ancient artifacts remain in storage in the museum’s basement, and it is feared that they are steadily deteriorating due to humidity and etc.

Fortunately, all these treasures will soon be transferred to the Grand Egyptian Museum. Once the new Giza Museum opens its doors, we believe that it will add even more value to our Egypt tour packages, and that it will become one of the most visited tourist attractions in the country. 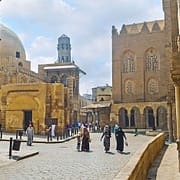 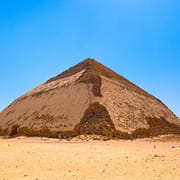 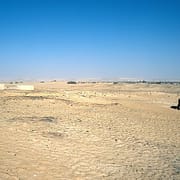 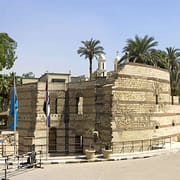 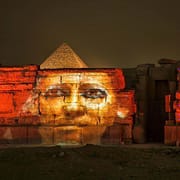 Giza Pyramids Sound And Light Show – The Best Of Both Worlds