Most people who visit Morocco with one of our epic Egypt and Morocco Tours end up spending a few days in the imperial city of Marrakech, not least because of the fact that there are many fascinating Marrakech attractions, one of which is Bab Agnaou. When the old city of Marrakech was first founded, it was surrounded by protective walls which featured a total of 19 huge gates through which the city could be accessed. 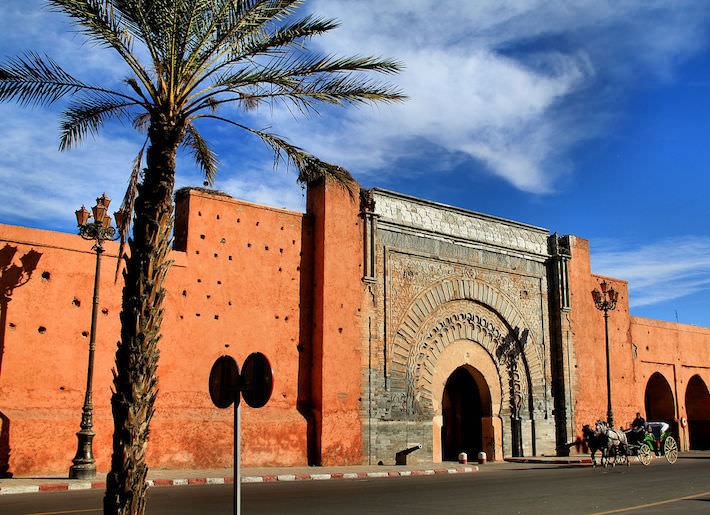 Bab Agnaou, which was one of the original gates, is located on the southern side of the old city of Marrakech, and faces towards Sub-Saharan Africa.

Today, most tourists who choose to visit attractions such as the Saadian Tombs and the El-Badi Palace, will pass through the imposing Bab Agnaou gate.

The façade which surrounds the giant horseshoe-shaped archway consists of a combination of stone and brick, and has been decorated with inscriptions from the Quran and various floral decorations.

There is not particularly much to see at the gate, but it makes for a fantastic photo-taking opportunity.

Its impressive size and design, coupled with its very convenient location, have made it one of the most visited tourist attractions in Marrakech, and you will even find it featured in several of our Egypt and Morocco tours.

The gate’s stone segments are today in a somewhat poor state and are slowly but surely decaying, in part because of the building materials which were used when the gate was constructed, and also due to modern day air pollution.

However, when you visit the site, it is easy to imagine how this impressive this entrance would have looked in its heyday.

While Bab Agnaou may not be one of the most thrilling Morocco tourist attractions, it is one which most visitors to Marrakech will get to see while exploring the city.

A Brief History of Bab Agnaou

Bab Agnaou was originally constructed during the 12th century when Morocco was being ruled by the Almohad Dynasty.

However, Bab Agnaou provided direct access to the Royal Kasbah which was built in the southern part of the city’s medina by an Almohad sultan called Abu Yusuf Yaqub al-Mansur.

There is some debate as to how the gate got its name.

Some people believe “Agnaou” comes from the word “agnaw,” a Berber word which means “deaf man mute man.” This term was also used to describe anyone who couldn’t understand and speak the Berber language. All non-Berber people were referred to as Agnaw, but in most cases, it used to referred to the black people of Sub-Saharan Africa. This theory is strengthened by the fact that Agnaou faces south towards Sub-Saharan Africa.

Others argue that the name comes from a Berber word which means a mute ram with no horns. However, in some historical writings, the gate was called Bab el-Kuḥel which again is a direct reference to black people.

While there is not really a great deal to see at Bab Agnaou, we definitely recommend visiting the site, and especially since it is so conveniently located. Regardless of which one of our Egypt and Morocco Tours you choose, you will almost certainly get to see this attraction.

Sites such as the Royal Palace and the Saadien Tombs typically rank quite high on the list of places to see in Marrakech for most visitors, and the best way to access these sites is via Bab Agnaou. It is not a particularly exciting attraction, but it is still a great one to visit.

House of Photography in Marrakech