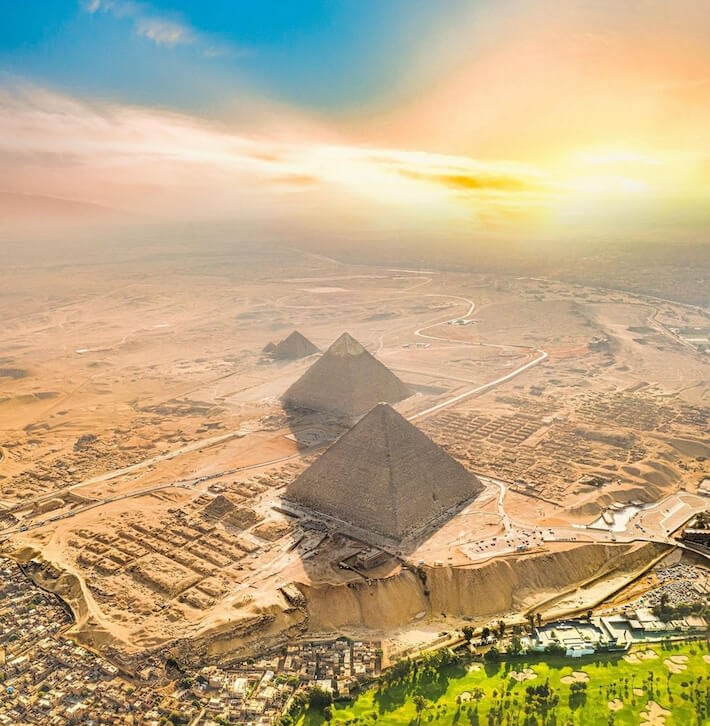 The 7 most famous pyramids in Egypt include the pyramids of pharaohs Khufu, Khafre and Menkaure near Cairo; the Step Pyramid of Djoser at Saqqara; the Red Pyramid and Bent Pyramid at Dashur, and the Meidum Pyramid to the south of Cairo.

The Giza Pyramids feature in nearly all of our Egypt tour packages. A trip to the Step Pyramid of Djoser is also included in many of our tour itineraries. While the others that are mentioned above don’t feature in many pre-packaged tours, visiting them can easily be arranged because all of our tours are fully customizable.

Continue reading to find out more about the history and location of the seven most famous Egyptian pyramids.

#1 The Pyramid of Khufu (Great Pyramid) 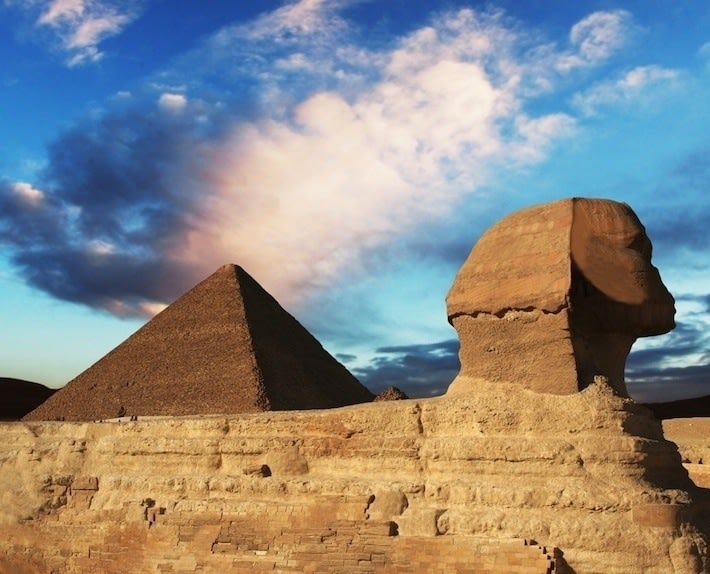 The Great Sphinx and the Great Pyramid – the most famous Egyptian pyramid.

The Great Pyramid is the largest of the three pyramids located at the ancient Giza necropolis on the outskirts of modern-day Cairo. It is the oldest of the 7 Wonders of the Ancient World, and the only one still standing and largely still intact.

The Great Pyramid was originally encased in polished white limestone, nearly all of which has long since been removed. The core structure which is visible today consists of around 2.3 million stone blocks. Together, these would weigh approximately 6 million tons. The original pyramid reached a height of 146.5 meters (481 feet), making it the tallest manmade structure on earth, a record that it held for the next 3,800 years.

Like all the other famous pyramids in Egypt, the Great Pyramid was robbed and looted in antiquity. The pyramid is usually open to visitors. The Giza Pyramids feature in nearly all of our Egypt tour packages. However, visitors who wish to enter the pyramid are required to purchase an admission ticket at the site.

When the Pyramid of Khafre was first explored in modern times (1818), it was hoped that the burial chamber would be found sealed and still intact. Unfortunately, this was not to be. All that remained in the burial chamber was an empty sarcophagus and its broken lid.

Egyptologists believe that the Pyramid of Khafre was first opened during the 19th Dynasty period to remove some of the casing stones that were used in the construction of a temple at Heliopolis ordered by Ramses II. It is not clear when the other casing stones were removed.

On arrival at the Giza necropolis, the Pyramid of Khafre appears to be the tallest of the three pyramids. However, this is an illusion caused by the fact that the pyramid was built on a raised section of bedrock, and also because of its steeper sides.

Khafre’s pyramid is usually open to visitors. However, if want to see inside the pyramid you will need to purchase an admission ticket at the site. Alternatively, if you are contemplating booking one of our package tours that include a visit to the pyramids and you want to see inside this pyramid, you can customize your Egypt tour here.

The Pyramid of Menkaure is the smallest of the three famous pyramids at the ancient Giza necropolis on the outskirts of modern-day Cairo. It is believed to have been built to serve as a burial tomb for Menkaure, a Fourth Dynasty Egyptian pharaoh.

Because pharaoh Menkaure’s reign has never been accurately defined, it remains unclear when exactly his pyramid was constructed. As with the other two pyramids at Giza, Menkaure’s pyramid was entered and robbed in antiquity.

When Menkaure’s pyramid was fully explored in modern times, a coffin containing some human bones was discovered. However, radio-carbon dating has shown that the bones were less than 2,000 years old, meaning that they did not belong to the pharaoh. A stone sarcophagus containing the remains of a woman was also found deep within the pyramid.

People visiting the Pyramid of Menkaure today will see a vertical gash on the northern face. This was caused by an attempt to demolish the pyramid. In 1196 AD, the Sultan of Egypt demanded that the famous pyramids in Egypt be demolished. However, workers were only able to remove two stones per day, and after eight months of work, the demolition project was abandoned.

As already mentioned, nearly all of our Egypt tour packages include a visit to the Giza Pyramids. We also offer short stand-alone Giza Pyramids tours that include private transport and the services of one of our Egyptologist guides. If you would like to look around inside Menkaure’s pyramid you can purchase an admission ticket at the site or you can customize your Egypt tour here.

Djoser’s Step Pyramid in Saqqara – and “parked” camels up close

The Pyramid of Djoser, also known as the Step Pyramid, is an ancient Egyptian pyramid located in the ancient Saqqara necropolis, approximately 30 km to the south of Cairo, the Egyptian capital. It was built during the 27th-century BC to serve as a burial tomb for Djoser, a Third Dynasty Egyptian pharaoh.

The Djoser Step Pyramid was the first pyramid ever built by the ancient Egyptians, and also the first significant stone structure built in Egypt. It is a 6-tier, 4-sided pyramid that originally reach a height of 62.5 meters. The pyramid was reopened to visitors in March 2020 following a 14-year-long restoration project.

Much of the Step Pyramid complex is located beneath the surface, where a labyrinth of galleries and tunneled chambers cover an area of roughly 6 km. The entire pyramid complex covers an area of around 37 acres. By the time Djoser’s pyramid complex was completed, it was about 2.5 times the size of the ancient Old Kingdom town of Hierakonpolis.

As with the other famous pyramids in Egypt, the Djoser Pyramid was entered and looted in antiquity. However, archeologists did find some ancient artifacts, including more than 40,000 stone vessels, many of which pre-date the pharaoh’s reign.

The Bent Pyramid is located in the ancient royal Dashur necropolis in the desert on the west bank of the River Nile, approximately 40 km to the south of modern-day Cairo. The pyramid was built in 2600 BC on the orders of Sneferu, a Fourth Dynasty Egyptian pharaoh.

The Bent Pyramid was the second pyramid built by pharaoh Sneferu. The pyramid represents a transition from stepped pyramids to smooth-sided pyramids such those seen at Giza.

The Red Pyramid is an Egyptian pyramid located in the ancient Dashur necropolis, just a short distance away from the Bent Pyramid. The Red Pyramid, also known as the North Pyramid, was also constructed between 2575 and 2551 BC, during the reign of pharaoh Sneferu.

The Red Pyramid was the third pyramid built during the reign of pharaoh Snefery, and it is believed to be the first successfully completed smooth-sided pyramid ever built by the ancient Egyptians. It is the largest pyramid at the Dashur necropolis and also the third-largest ancient Egyptian pyramid after the Pyramid of Khufu and the Pyramid of Khafre at the Giza necropolis near Cairo.

The Red Pyramid is also one of the best-preserved famous pyramids in Egypt. Egyptologists believe that pharaoh Sneferu had the pyramid built to serve as his burial tomb. However, despite the discovery of human remains, it has never been established if these belonged to Sneferu.

The Red Pyramid at Dashur would originally have been a brilliant white color due to it polished limestone outer casing. Unfortunately, the white limestone casing was removed during the Middle Ages and was used in the construction of various buildings in Cairo.

If you are planning a trip to Egypt and you are contemplating a visit to the Dashur necropolis, you can read more about the Red Pyramid here.

The inner core of the collapsed pyramid at Meidum. Aka the Meidum Pyramid.

The Meidum Pyramid is an ancient Egyptian pyramid located approximately 100 km to the south of modern-day Cairo. It is believed to be the second pyramid built after the Step Pyramid of Djoser. It is also believed to have been the first attempt at building a smooth or flat-sided pyramid.

The Meidum Pyramid, which is one of the most famous Egyptian pyramids, was originally built in the form of a stepped pyramid. At some point during its construction, the decision was made to fill in the steps, thereby creating an outer casing with smooth sides. However, the outer walls collapsed before construction was completed and the project was likely abandoned at that point.

Many people who visit the Meidum Pyramid usually do so while staying in Cairo where the also visit other popular Cairo tourists attractions like the Cairo Citadel and the 14th-century Khan el Khalili Bazaar. You can read more about the Meidum Pyramid here, or if you are ready to visit the pyramid or any of the other most famous pyramids in Egypt, you can also create a customized Egypt tour here.