Jemaa el-Fnaa, which is also known as Djema el-Fnaa, Jemaa al-Fna, or Djema el-Fna, is located in Marrakech’s Old City which today is best known as the Medina Quarter. While some might describe it as being a sort of town square, Jemaa el-Fnaa also serves as a market place. In fact, it is the main market square in Marrakech, and it is immensely popular among locals and tourists alike making it one of the most important places to visit in Marrakech. Not surprisingly, you will find this site featured in all of our Egypt and Morocco Tours. 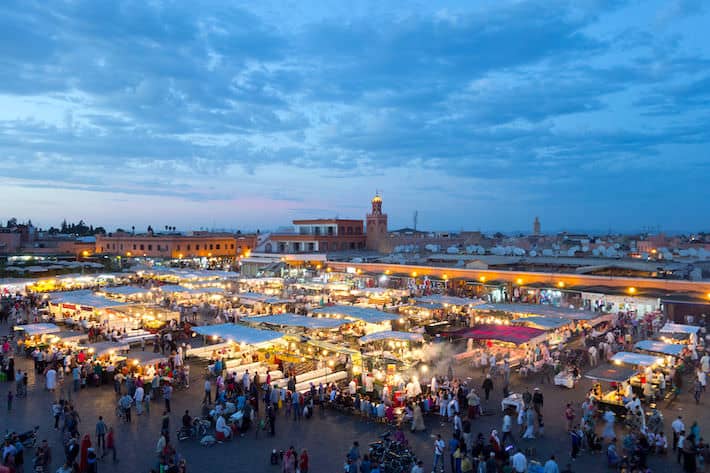 There are several theories regarding the origin or the meaning of the name, but nobody can say with 100% certainly how the square became known as Jemaa el-Fnaa. In the Arabic language, Jemaa means congregation, leading some people to believe that it is a reference to an Almoravid dynasty-era mosque which once stood on the site where Jemaa el-Fna stands today.

Alternative spellings, such as “Fina” can also mean a courtyard-like space located in front of a building, while “Fana” can mean death. Some historians have speculated that if the variations of the name are mixed together, then the name could also perhaps be translated as Assembly of the Dead, or Assembly of Death.

For some, this theory does hold some weight given the fact that according to historical records, the square was used for carrying out public executions at around 1050 AD.

The Early History of Jemaa el-Fnaa 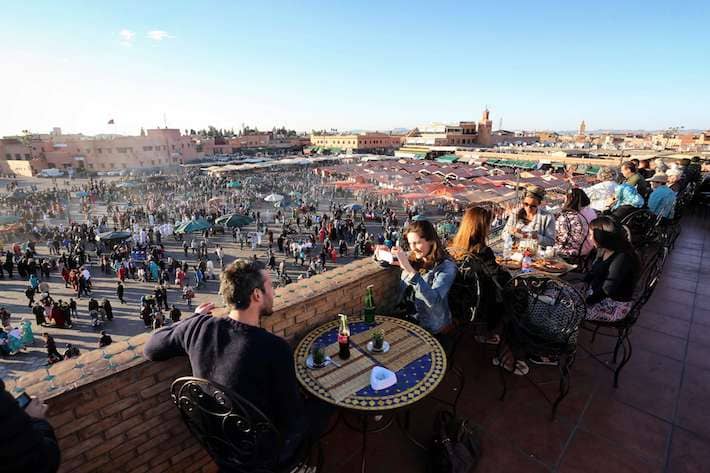 The Almoravids founded the city of Marrakech between 1070 and 1072, but after a long and viscous struggle, the city slowly but surely began falling into the hands of the Almohads.

By 1147, the Almohads had seized full control of the city, and subsequently began to repair and renovate the square and the surrounding city. The palace, hospital, and the mosque which were located on the edge of the quare were all renovated and improved, along with the area’s parade ground and its vast garden.

From this time on, it was a bit of a rollercoaster ride for the city. The city was left to deteriorate several times, only to be renovated again as wealth flowed in and out of the area.

What to Expect during Your Visit to Jemaa el-Fna

Boiled snails stand at the Jemaa el-Fnaa square in the medina quarter of Marrakesh.

What you can expect to encounter at Jemaa el-Fna will depend entirely on what time of the day you visit. During most of the day, will encounter countless stalls selling fresh orange juice which really goes down exceptionally well in the warm Moroccan weather.

You will also come across numerous water vendors with their tradition leather water bags. The leather bags keep the water surprisingly cool, and strangely enough, the water which is stored in them does not any leather-like taste or smell.

Snake charmer at the Jemaa el-Fnaa square in Marrakesh.

In addition to all these vendors, expect to see quite a few younger Moroccans walking about with chained Barbary monkeys offering photo opportunities. You will also see several snake charmers at the square during the day. Ironically, Barbary apes and Cobras are both protected species in Morocco, but the authorities tend to turn a blind eye.

As the sun starts heading towards the horizon later in the afternoon, most of the people who have occupied the square throughout the day slowly begin to disappear, and are subsequently replaced by story tellers; magicians; peddlers selling traditional medicines, and Chleuh dancers.

Later still, once darkness falls, Jemaa el-Fna becomes home to literally dozens of food stalls. This is also when the number of people at the square peaks as locals and tourists alike flock to the area for delicious Moroccan food which is ridiculously cheap and affordable. While our Egypt and Morocco Tours typically only include a daytime tour of the square, we highly recommend that you also visit the square in the evening at least once during your stay.

Like virtually all crowded spaces, and particularly those frequented by tourists, there is a certain degree of risk in terms of pick-pockets and etc. However, Jemaa el-Fna is incredibly safe for both tourists and locals.

The authorities are fully aware of the square’s tourism value, and they are not willing to let a few petty thieves jeopardize that.

In order to ensure a very high degree of safety, there is a formidable police presence in the area at all times, although for the average tourist, it would seem like it because it is done very discreetly, using mostly non-uniformed officers.

Just be warned, if someone does approach you and they attempt to sell you something which is illegal, do not be tempted into buying it because you will almost certain be caught and apprehended.

Jemaa el-Fna is a fantastic place to visit when you are in Marrakesh. In fact, if you have the time, you should definitely try to visit the square at different times of the day in order to sample the various types of entertainment being offered.

Above all, any visitor to Marrakech should visit this lively square at least once at night to enjoy some excellent and 100% authentic Moroccan food.

No matter which one of our Egypt and Morocco tour packages you choose, you can look forward to a guided tour of the square, and you will also have ample time to explore the square on your own.