The Monastery of St. Catherine in Egypt is an ancient Greek Orthodox monastery located in Egypt’s Sinai Peninsula region. It is a popular tourist attraction among travelers that go hiking and trekking in the area before making their way to one of the resort towns along the coast, such as Sharm El Sheikh for example. 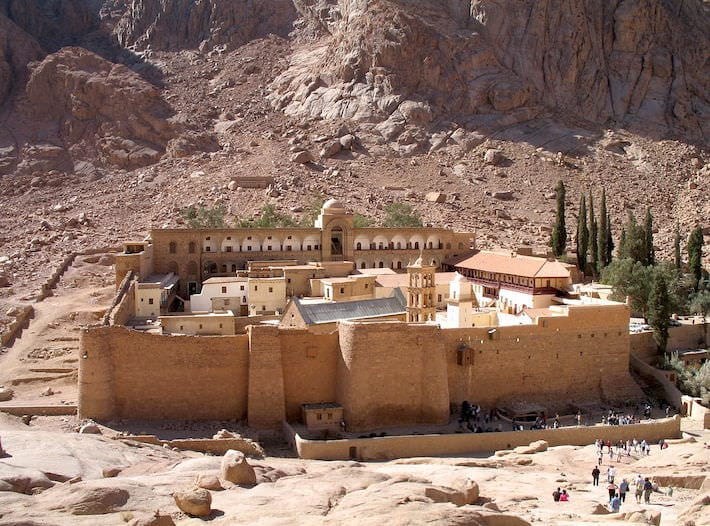 Monastery of St. Catherine is also known to be one of the oldest continuously occupied monasteries in the world, and today if features prominently on the tourist map, along with a few other nearby attractions such as the Colored Canyon.

Visiting the Monastery of St. Catherine 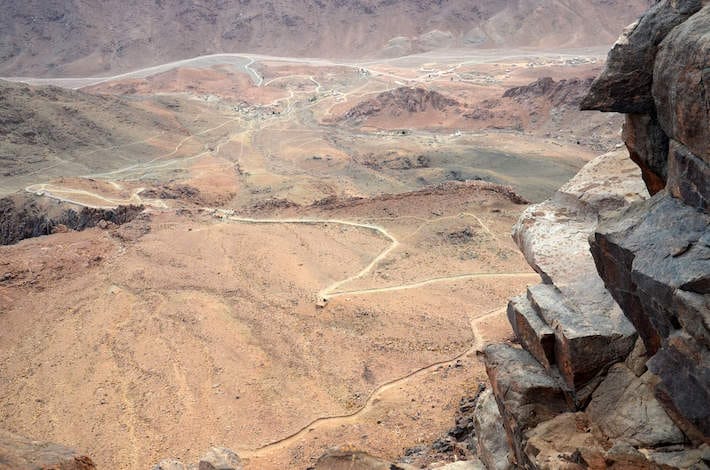 Mount Sinai (aka Moses Mountain). The road to climb seen from the top.

Apart from the historical significance of the monastery itself, many tourists visit and climb Mount Sinai (Gabal Moussa) because of its religious significance. Mount Sinai is believed to be the place where God appeared to Moses in the form of a burning bush and gave him the Ten Commandments.

It is also believed to be the place where God instructed Moses to lead his people out of the country, to the promised land. Interestingly enough, the followers of Islam, Judaism and Christianity all agree that Mount Sinai is the place where it happened.

At the foot lies one of the oldest Christian monasteries in the world, the Greek Orthodox Monastery of St. Catherine. One of the first things visitors will notice is that the monastery is tucked snugly away in the rocky, barren landscape of South Sinai.

The maintenance of its priceless and virtually intact collection of icons and manuscripts, can be explained primarily by the safety of its location.

The Monastery of St. Catherine complex is home to a number of famous icons, including the main church; the chapel of the Burning Bush; the old refectory; the Fatimid mosque, and a library.

If you have an interest in religious history, or if you simply feel that you need some quality time for yourself, you could very easily spend an entire day exploring this timeless marvel.

The Legend of the Monk – Fact or Fiction

St. Catherine’s Monastery at the foot of Mount Sinai.

Various stories have been passed down from one generation to the next in an attempt to explain Saint Catherine’s association with Mount Sinai. One of the most popular explanations is that a Sinai female monk once had a vision in which she was able to witness the five centuries that were to follow her death.

In her vision, her body was not only spared from decay, but it also became radiant with light as it was carried aloft by by a group of angels to a peak near Mount Sinai. As a result of the legend, the peak where her body was placed was later named the Mount Saint Catherine’s.

Legend also has it that at some point during in the ninth century, a group of monks set about ascending the mountain, and when they finally reached the peak’s summit, they found the body of the Saint Catherine.

It is said that upon being discovered, her body was still completely intact and it was exuding sweet-smelling myrrh that was periodically collected in small bottles, due to the fact that it was purported to have super-natural healing properties.

During the time of the Crusaders, the martyrdom of Saint Catherine, along with the news of her body being found in Sinai, spread like wildfire not only through Egypt, but throughout Europe.

Today, even after so many years have gone by, many pilgrims continue to visit Mount Sinai; Mount Saint Catherine’s and the Monastery of St. Catherine.

Come Explore the Best of Egypt