Abdeen Palace is located on the eastern side of downtown Cairo, just above Qasr el-Nil Street. Today the palace functions as a museum that essentially consists of multiple museums, including the Silver Museum; the Arms Museum; the Royal Family Museum; a Presidential Gifts Museum, and a Historical Documents Museum which is a relatively new addition. Since not all people are passionate about visiting museums, we have not included this venue in most of our existing Cairo tour packages, but it can be added upon request.

With so many interesting museums all under one roof, it should come as no surprise to hear that Abdeen Palace is today one of the more popular Cairo tourist attractions. 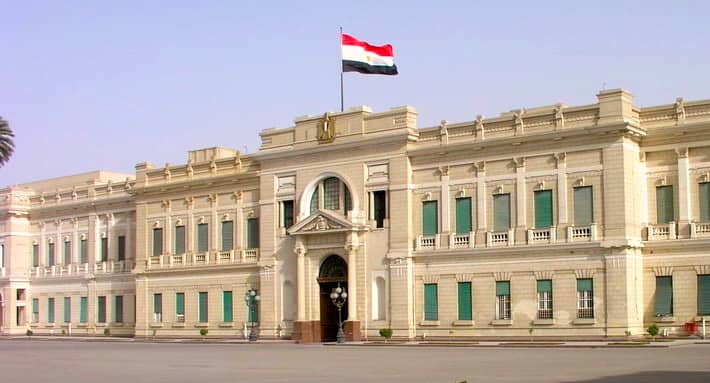 Apart from its role as a museum, Abdeen Palace is also one of the official residences and places of work for the President of Egypt. The upper floor of the building has also been reserved for visiting foreign dignitaries and other VIP guests. If you take all of this into consideration, it should already give you some idea as to just how enormous the Abdeen Palace is.

A Brief Overview of Abdeen Palace

Panorama of Abdeen Palace with the scenic park on El-Gomhoreya Square.

Abdeen Palace was built on the grounds of what was once a small mansion that belonged to Abidin Bey, a commander and politician in Egypt during the Muhammad Ali era. In fact, Abidin Bey was part of Muhammad Ali’s core group of commanders. Later in history, the decision was made to build a vast palace on the site of Abidin Bey’s mansion, and the palace would serve as the government headquarters, rather than the Cairo Citadel which had served the same purpose ever since the Middle Ages.

Building work started in 1863, and the palace was finally completed 10 years later, with the official inauguration taking place in 1874. The palace, upon completion, covered an area of 24 feddans, which is equivalent to about 100,800 square meters. However, in 1921, Sultan Fuad had a vast garden added which covered an additional area of 20 feddans, roughly 84,000 square meters.

The total building costs reached 700,000 Egyptian pounds, and an additional 2 million pounds was spent on furnishing the vast Abdeen Palace with its 500 hundred suites. When it came to furnishing the palace, no expense was spared, and today it is thought to be the most lavish and most opulent palace in the world. It is also worth noting that considerable sums of money were also spent on maintenance, alterations and preservation efforts by consecutive rulers.

Two things that really stand out when you visit the palace, is the sheer number of paintings that adorn the walls of just about every room, as well as the huge collection of clocks, many of which are decorated with pure gold.

Columns in the garden of Abdeen Palace.

People who visit Abdeen Palace expecting to have the same sort of experience they had at the Egyptian Museum, are bound to be somewhat disappointed because the two venues have absolutely nothing in common. However, the vast majority of people who visit the palace are left feeling thoroughly impressed.

What we like most about Abdeen Palace is the fact that there are several museums in the building. Your entrance ticket allows you to visit all of them, and you are free to spend as much time as you like at the site. Even if there were no museums, we would still recommend visiting this site, if only to admire the building’s splendor and grandeur.

Abdeen Palace opens at 09h00 in the mornings, and you will usually be met at the door by a curator who will be more than happy to give you a guided tour; something which we highly recommend because their knowledge is quite simply incredible. If museums are your sort of thing and you have at least two hours or more to spare, then our advice is: don’t miss out on the opportunity to visit and explore the real gem in Cairo.

Explore the Best of Cairo Your Way!