In medieval Egypt, perhaps the most significant event to occur since the unification of the Two Lands by King Menes in ancient times was the Arab conquest.

The Arab Conquest of Egypt

The conquest of the country by the armies of Islam under the command of the Muslim hero, Amr ibn al Aas, transformed medieval Egypt from a predominantly Christian country to a Muslim country in which the Arabic language and culture were adopted even by those who clung to their Christian or Jewish faiths.

The conquest of Egypt was part of the Arab/Islamic expansion that began when the Prophet Muhammad died and Arab tribes began to move out of the Arabian Peninsula into Iraq and Syria. Amr ibn al Aas, who led the Arab army into Egypt, was made a military commander by the Prophet himself.

Amr crossed into Egypt on December 12, 639, at Al Arish with an army of about 4,000 men on horseback, armed with lances, swords, and bows. The army’s objective was the fortress of Babylon (Bab al Yun) opposite the island of Rawdah in the Nile River at the apex of the Delta. It was the key to the Arab conquest of Egypt because an advance up the Delta to Alexandria could not be risked until the fortress was taken. In June 640, reinforcements for the Arab army arrived, increasing Amr’s forces to between 8,000 and 12,000 men.

Finally, after a six-month siege, the fortress fell to the Arabs on April 9, 641. The Arab army then marched to Alexandria, which was not prepared to resist despite its well fortified condition. Consequently, the governor of Alexandria agreed to surrender, and a treaty was signed in November 641.

The following year, the Byzantines broke the treaty and attempted unsuccessfully to retake the city.

Muslim conquerors habitually gave the people they defeated three alternatives: converting to Islam, retaining their religion with freedom of worship in return for the payment of the poll tax, or war.

In surrendering to the Arab armies, the Byzantines agreed to the second option. The Arab conquerors treated the Egyptian Copts well. During the battle for Egypt, the Copts had either remained neutral or had actively supported the Arabs.

After the surrender, the Coptic patriarch was reinstated, exiled bishops were called home, and churches that had been forcibly turned over to the Byzantines were returned to the Copts. Amr allowed Copts who held office to retain their positions and appointed Copts to other offices.

Amr moved the capital south to a new city called Al Fustat (present-day Islamic Cairo). The mosque he built there bears his name and still stands, although it has been much rebuilt. For two centuries after the Arab conquest of Egypt, medieval Egypt was a province ruled by a line of governors appointed by the caliphs in the east. Egypt provided abundant grain and tax revenue.

In time most of the people accepted the Muslim faith, and the Arabic language became the language of government, culture, and commerce. The Arab conquest of Egypt was aided by the continued settlement of Arab tribes in medieval Egypt.

From the time of the Arab conquest of Egypt onward, medieval Egypt’s history was intertwined with the history of the Arab world. Thus, in the eighth century, Egypt felt the effects of the Arab civil war that resulted in the defeat of the Umayyad Dynasty, the establishment of the Abbasid Caliphate, and the transfer of the capital of the empire from Damascus to Baghdad.

For Egypt, the transfer of the capital farther east meant a weakening of control by the central government. When the Abbasid Caliphate began to decline in the ninth century, local autonomous dynasties arose to control the political, economic, social, and cultural life of the country. 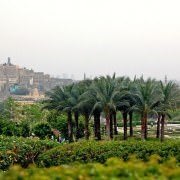