The Qalawun Complex was a huge complex that consisted of a mosque; a madrasa; a mausoleum, and a hospital, but the hospital section was demolished in 1910. The complex is located in the heart of Cairo, in an area known as Bayn al-Qasrayn, which in turn is located in what is commonly referred to as Old Cairo or Medieval Cairo. Some of the architectural work at the Qalawun Complex is considered to be among some of the finest such examples in Cairo. Visit this amazing complex in absolute comfort and style with one of our flawless Cairo tour packages. 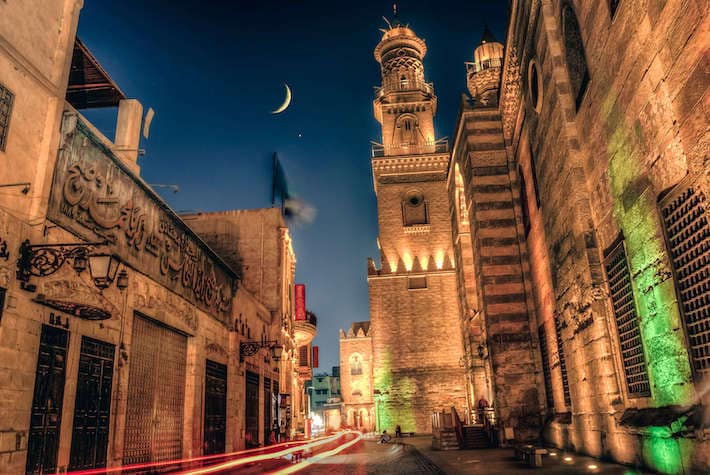 The site is in close proximity to a number of other very popular Cairo Tourist Attractions, including the somewhat older Sultan Al-Ghuri Complex. All in all, the Qalawun Complex is a fantastic place to visit, and particularly if you are enthusiastic about old Islamic architecture and Islamic history in general. 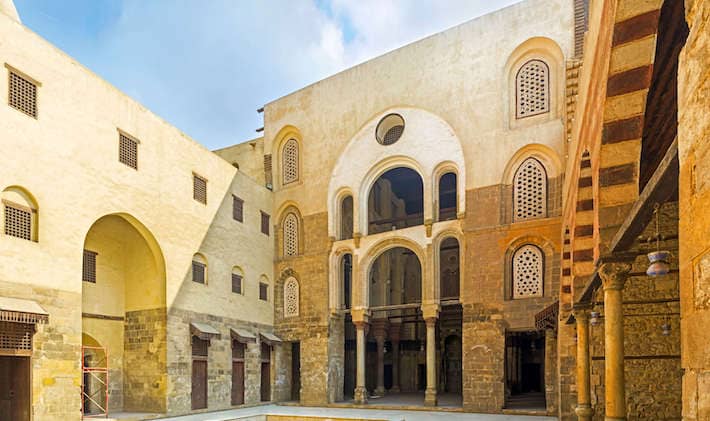 The courtyard of Qalawun complex. Arched rebuilt entrance to the medieval mosque.

The ground, on which the Qalawun funerary complex now stands, used to be home to a Fatimid palace. Many of the old palace’s halls were sold off, and there were people living in them until Sultan Al-Nasir Muhammad Ibn Qalawun bought the entire area in 1283. He had allegedly made a promise to God that he would build a hospital in Cairo similar to the one he was treated in while in Syria.

Construction of the Qalawun Complex then started in 1284, and astonishingly, it was completed the following year in 1285. The entire complex was built in just 13 months, although most people find it hard to believe considering its vast size. The hospital, which was built first, took less than 6 months to complete, while the madrasa and the mausoleum each took around 3 months to complete.

So, how was such a vast complex built in such a short period of time? Some people might be tempted to accuse the sultan of using slave labor. However, the sultan himself never actually supervised this particular project. Instead, construction of the Qalawun Complex was supervised by emir ‘Alam al-Din Sinjar al-Shaja‘i. He never reverted to slave labor, but instead, he made use of Mongol prisoners of war.

In addition to all the prisoners who were forcefully employed, emir ‘Alam al-Din Sinjar al-Shaja‘I also called on called on regular workers throughout the city to assist with the project. In fact, he was so determined to acquire a large workforce that even people walking the streets were ordered to help. By the time the complex was completed, it was considered to be the most beautiful building in the entire region.

The Qalawun Complex underwent its first recorded restoration project during the reign of al-Nasir Muhammad, the sultan’s son. This took place in 1327 after a major earthquake caused significant damage to the complex’s minarets. Al-Nasir had the complex renovated and restored a number of times during his reign but it was only the restoration of the minarets that was recorded on the complex.

Later, in 1776, Abdul-Rahman Katkhuda also commissioned some renovation work to be carried out. This project included the building of a truly beautiful Ottoman-style sabil on the opposite side of the road.

When it came to having the mausoleum built, Sultan Qalawun wanted a mausoleum more beautiful than any he had ever seen. As a result, his mausoleum at the Qalawun Complex is now considered to be the world’s second-most beautiful mausoleum, surpassed only by the famous Taj Mahal in India.

Some historians believe that Qalawun never had any intention of using the mausoleum as a burial site. They argue that it was originally meant to serve as a mosque and a school.

The mausoleum’s dome was of great significance because it was symbolic of a new rise of Mamluk power. This later led to the dome being demolished by an Ottoman governor. In its place, a new Ottoman-style dome was built, only to be replaced again in 1908 by the Center for Reservation of Arab Monuments.

The madrasa at the Qalawun Complex is by no means as elaborate as the mausoleum, but it is still very impressive nonetheless. In its heyday, the madrasa was used for teaching all four legal schools that were recognized under Islamic law.

The madrasa was also used for teaching other subjects as well, including medicine.

Today, the hospital which formed a part of the original complex no longer exists, having been demolished in 1910. After it was built and opened, it would have been the most advanced and most lavish hospital in all of Egypt.

In addition to being used for treating the sick and wounded, it also served as a venue where medicine was taught. In fact, the hospital also provided medicine, shelter, food, and even clothing for the poor.

Stone walls of the medieval Qalawun complex on the oldest street in Cairo, Al-Muizz Street.

The Qalawun Complex is a huge site, and also a very remarkable one. It is also located in a particularly fascinating part of Cairo, and in relatively close proximity to several other excellent attractions. In short, any tour through this part of Cairo is likely to leave you with lifelong memories.

Visiting the Qalawun Complex really is like a journey back through time.

At Egypt Tours Plus, we realize that not all people are interested in old Islamic architecture and culture, but for those who are interested, the Qalawun Complex promises to be a real gem.

If you would like to visit the Qalawun Complex, and you are thinking about booking one of our Cairo Tour Packages or one of our more extensive Egypt Tour Packages, please be sure to check your preferred tour itinerary to see if this attraction is included or not.

Note: All our tour packages can be customized, so if you would like this attraction added to your chosen itinerary, you can simply let us know and we will be happy to do so.

Abdeen Palace – Is This the World’s Most Lavish Palace?