Egypt is generally a very safe country for tourists, including tourists who are traveling alone. With that said, solo travelers should avoid exploring quiet areas on foot after sunset.

Apart from certain areas in cities like Cairo and Giza, there are also some parts of the country which are best avoided due to safety concerns and the threat of attack by armed groups.

So, is Egypt safe to travel alone? For the most part, it is very safe, and even solo travelers can enjoy a perfectly safe trip without experiencing any dangerous or stressful situations. As is often the case, a bit of common sense can also go a long way in helping you to avoid problems regarding your personal safety. 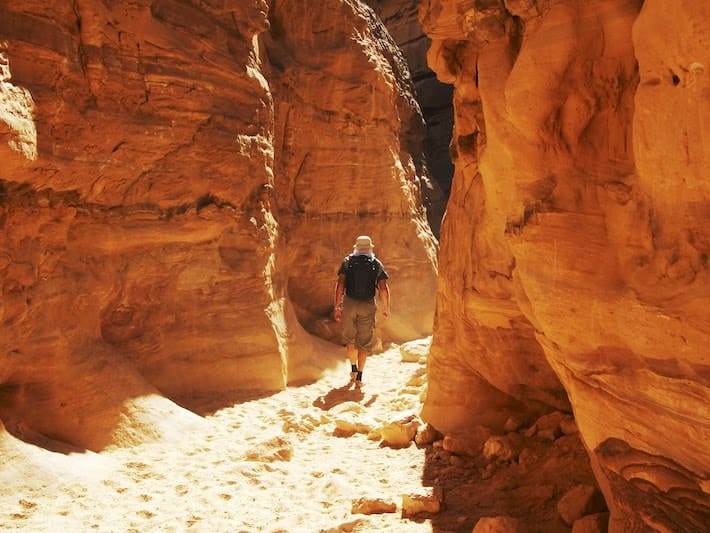 Exploring the Streets of Cairo and Giza at Night Alone

Many locals will tell you that the streets of Cairo, Giza, and other major cities can be dangerous even during the day, and even more dangerous at night. In reality, however, exploring Cairo or Giza on foot is probably far less dangerous than it would be in many other cities around the world.

The problem is unfamiliarity. When you are in an unfamiliar city, you have no way of knowing which areas to avoid. With that said, even the worst neighborhoods in Cairo are safe compared to many other cities around the world.

All of Cairo’s popular tourist attractions are located in parts of the city which are typically very safe, even for people traveling alone. Petty crime, such as pickpocketing and bag or purse snatching does happen, but it is generally restricted to very crowded areas that are frequented by expats, tourists, and middle class Egyptians.

Is Egypt Safe to Travel Alone as a Female traveller?

While many Egyptian women experience sexual harassment, things are different for female tourists. It is rare for female travelers to experience sexual harassment while traveling in Egypt. With that having been said, women travelers who wear very revealing clothes are likely to attract stares and unwanted attention, and possibly the occasional wolf whistle. Remember, Egypt is a conservative country and tourist should consider dressing somewhat conservatively as well.

As has been said earlier, exploring the streets on foot after the sun has set is not recommended. Women travelers who have questions about safety should discuss any safety concerns they have with their tour guide and/or with staff at the hotel where they are staying. Many hotels keep a list of important telephone numbers, including numbers of local police stations and English speaking female police officers.

While every visitor can benefit tremendously from having a tour guide, women traveling alone should definitely consider hiring a guide or booking private tours that include a professional guide and driver.

Recommended reading: Is It Safe to Travel to Egypt as a Woman?

Travel advisories from countries like the USA, Canada, the United Kingdom and all European member states advise against all non-essential travel in Egypt’s South Sinai region. Only a few South Sinai coastal resorts like Sharm El Sheikh are deemed to be safe.

Is Egypt safe to travel alone if you are going to be traveling to a place like Sharm El-Sheikh or Dahab? Yes, but we would recommend flying to Sharm El Sheikh rather than traveling overland. Sharm El Sheikh has very robust tourism infrastructure and a high level of security.

According to travel warnings issued by the same countries mentioned previously, all travel in North Sinai should be avoided. In the northern parts of North Sinai in particular, and especially near Egypt’s border with Israel, where there is a very real threat of terrorism. Armed groups and bandits also often infiltrate the area, and for this reason, the Egyptian security forces routinely restrict all travel in North Sinai, regardless of whether you are traveling alone or in a group.

So, is Egypt safe to travel alone if you avoid the Sinai Peninsular altogether? Well, it all depends on what other parts of the country you want to visit.

Recommended reading: Where NOT to Visit in Egypt?

Traveling Alone at the Libyan and Sudanese Border Regions?

All travelers, including solo travelers and group tours are advised against traveling to areas within 50 kilometers of Egypt’s borders with Libya and Sudan. Despite this warning being in place, the rock-hewn temples of Ramses II at Abu Simbel remain an immensely popular Egyptian tourist attraction. The Abu Simbel temples are located in Southern Egypt, approximately 20 kilometers from the Sudanese border.

If you are a solo traveler and you want to visit this breathtaking site, you should consider doing so by way of a Lake Nasser cruise. If this is not possible for you, you will most likely have to travel by road from Aswan, in which case we highly recommend booking a professionally organized private Egypt tour through a reputable tour operator.

An Incredible Time Awaits in the Land of the Pharaohs

The vast majority of tourists who visit Egypt have a positive experience. Whether you want to devote your entire holiday to visiting Egypt’s many major tourist sights, or whether you want to spend your Egypt vacation relaxing at a coastal resort like Sharm El Sheikh, you can have an amazing time in this amazing country.

So, is Egypt safe to travel alone? We, and many millions of others, believe that Egypt is a very safe destination for tourists, even if you are going to be traveling alone.

If you are longing to explore Egypt, we can help, and with more than 500,000 tours already sold, we really do know how to make dreams come true, with lifetime memories guaranteed.

At Egypt Tours Plus, you will find a fantastic selection of high quality Egypt tour packages. In addition to our pre-packaged tours, we also offer custom made Egypt tours so that you can see Egypt your way.