The pharaohs of ancient Egypt ruled over one of the oldest and most spectacular civilizations in the world, spanning an astonishing period of more than 3,000 years.

Many thousands of years ago, Egypt was inhabited by nomadic tribes who foraged for food in the rich vegetation of the banks of the Nile, and who hunted the many wild animals that once thrived on the savannah plains that covered the region. Climatic changes led to a process of desertification, and, in time, groups began to settle permanently along the waters of the river.

By around 4000 B.C., the Nile Valley and Delta were teeming with sedentary agricultural communities that had come to live in harmony with the river, waiting for the annual floods before planting their crops in the rich soil that lined its banks.

In time, these flourishing settlements, which originally had little mutual contact, began to establish strong links with each other. The newly-forged bonds gave rise to the creation of two new kingdoms, that of Lower Egypt, in the Nile Delta, with its capital at Buto, and that of Upper Egypt in the south, with its capital at Hieraconpolis.

The Unification of the Two Kingdoms

In approximately 3100 B.C., an event occurred that would profoundly affect the future of the region. It was then that a powerful king by the name of Menes, the ruler of Upper Egypt, launched a military campaign and united the two kingdoms. King Menes subsequently established his capital at Memphis, which sat at the point where the Nile Valley meets the Delta, some 15 miles south of present-day Cairo.

The unification of Egypt laid the foundations of a single state, and gave birth to a new era – that of the pharaohs of ancient Egypt.

Lords of the Two Lands

The pharaohs of ancient Egypt ruled over one of the oldest and most spectacular civilizations in the world, spanning an astonishing period of more than 3,000 years. During this time a succession of 31 dynasties ruled the land, beginning with Menes himself in 3100 B.C. and ending with the last ancient Egyptian pharaoh, Nectanebo II, in 343 B.C.

The king, who from around 2500 B.C. onwards was believed to be the son of the sun god Ra, was the all-powerful ruler over the land and considered to be a direct link between his subjects and the gods. He bore the title of “King of Upper and Lower Egypt” and “Lord of the Two Lands,” and wore two crowns that symbolized the union of the two realms.

Heading the military, legal and religious institutions of the state, the pharaoh of ancient Egypt was charged with the critical task of maintaining order and warding off chaos in the world, thereby ensuring the continued support of the ancient Egyptian gods.

Such was the awe in which the ruler was held, it was reported that during the 5th Dynasty a courtier by the name of Washptah was so overcome after kissing the feet of his pharaoh Neferirkare that he died – normally subjects were restricted to merely kissing the ground on which their king walked.

The term “pharaoh,” in fact, only came to be used to refer to the king much later on during the New Kingdom. The word derived from Per Ao, meaning “The Great House” – the name given to the administration complex surrounding the royal court at Memphis.

The Decline and Fall of the Pharaohs

During the New Kingdom, Ramsees II and his successors were unable to pull Egypt out of what would prove to be a long and steady decline, bringing to an end the glorious age of the ancient Egyptian pharaohs.

During the 20th dynasty, towards the end of the 2nd millennium B.C., the Egyptian empire began to falter under the strain of repeated attacks by Mediterranean invaders known only as “Peoples of the Sea,” who crossed over from the region of Greece and attacked Egypt from the north, and via Libya in the west. The Third Intermediate Period was now upon Egypt.

As one weak dynasty followed another, the country slid into anarchy. Competing dynasties, including one founded by priests and another by a Libyan prince, began to tear the country apart. Eventually, in 667 B.C., the country was invaded by the Assyrians, a neighboring Middle Eastern empire with a reputation for ruthlessness and, for a brief while, they dominated the country.

The ancient Egyptian Pharaohs fought back and momentarily reestablished their rule, only to be invaded once more, in 525 B.C., by the powerful Persian Empire, which reduced their country to the status of a mere province. Despite initially respecting the customs and traditions of the ancient Egyptians, the new Persian rulers became heavy-handed once they had consolidated their power. A series of anti-Persian uprisings culminated in a brief spell of renewed Egyptian independence, only to be dashed by yet another Persian invasion in 341 B.C.

Barely a decade later, in 332 B.C., a 25-year-old Greek commander, known to the Western world as Alexander the Great, scored a series of victories against the Persians and heralded in a new phase of the history of the pharaohs of Ancient Egypt.

Alexander was the young ruler of a group of united Greek city states. He had shown himself to be a brilliant military commander and was in the process of building himself a huge empire. Jubilant at having been liberated from their Persian overlords, the Egyptians gave Alexander a hero’s welcome.

In Egypt, Alexander made the difficult journey to the Siwa Oasis to consult the famous oracle of Amun. It was a highly significant act for the Greek commander, who had dreamed in his youth that he was the son of Amun.

Fortunately, his divine birth was confirmed by the oracle. Satisfied, the priests of Amun accorded Alexander the honor of a deity, and he was accepted as the new pharaoh of Egypt.

Yet the ambitious Alexander had pressing military engagements elsewhere, and the following year he left Egypt to wage campaigns in the Middle East and the Indus Valley, in present-day Pakistan.

The young commander’s phenomenal career was cut short by a fever in 323 B.C., before he ever had the chance to return to Egypt. Following his death, his empire was divided amongst his most powerful generals. Egypt went to his close friend and companion, Ptolemy. The Egyptians, unaware of the extent to which they would lose their independence, were quite happy to accept him as Alexander’s heir and to proclaim him their new pharaoh.

The arrival of the Greeks dealt the final blow to the age of the pharaohs of ancient Egypt. Whereas before, the Egyptians had successfully pulled themselves out of periods of sustained crisis and reestablished their own dynasties, it would be a long time before the country would be ruled by native rulers once more. The Greeks were now in Egypt to stay, and for the next 300 years, it was Ptolemy’s who would hold sway over the country. 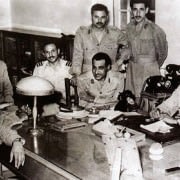