Wadi Natrun is a valley in Egypt, not far from Cairo, that has served many purposes throughout history, including being home to many hermits and many monasteries. You may not see this site featured in many of our Cairo tour packages, but we can add it to any one of our existing tour itineraries if requested.

For those people who have invested some time into studying the history of Ancient Egypt, the word “natrun” may sound familiar. The reason for this being that it was the term used for the sodium bicarbonate solution which was essential for the process of  mummification.

Natrun was harvested from several large alkali lakes throughout the northwestern region of the Nile Delta. As a result, the entire lake region on the outskirts of Cairo was given the name “Natron Valley” since it was one of the country’s biggest bicarbonate resources. With all that having been said, the valley is nowadays famous for another reason too. It might not be one of the most famous attractions in Cairo, but if you want a break from the city, then it is definitely worth a visit.

A Brief History of the Valley

During the 4th century AD, Wadi Natrun was chosen by Saint Macarius of Egypt as a site for his monastery. This in turn drew the attention of countless other monks and hermits from all over the country, and they too traveled to the valley. Once there, they began to settle nearby, and before long, there were no less than four large developments in which early Christians were practicing their faith.

Over the course of many years the area including the entire “Nitrian Desert” became home to many hundreds of thousands of Christians, but the area known as Scetis, which later became known as Wadi Natrun is the only inhabited area which survived.

By the end of the Muslim conquest of Egypt in the seventh century, the area was at its peak, but during the centuries that followed, it was devastated by a number of plagues and conflicts, Unfortunately, this had a significant impact which eventually led to the abandonment of most of the surrounding monasteries.

The 4 Remaining Monasteries of Wadi Nutrun

For this reason, modern day visitors to Wadi Natrun are mostly there to see the four remaining monasteries in this valley. These are among the best known monasteries in Egypt, and what makes them truly remarkable is the fact that all of them are still active to this day. The four monasteries which are still present and active are:

All four of these are Coptic Christian sites, and although there were once more than 50 such monasteries in this area, these are the only ones which can be seen and/or visited today.

Wadi Natrun itself is around 25 km long, and it is located roughly halfway between Alexandria and Cairo. The area is home to many saline and alkali lakes, but most historians believe that El-Gounfadiya and El-Hamra are the two that were most heavily used by ancient pharaohs.

There are no admission fees required for entering the Wadi Natrun monasteries, but all of them rely on donations and purchases in their souvenir shops, so it is recommended to leave a small donation if possible.

There are many buses that depart from both Cairo and Alexandria which take travelers directly to Wadi Natrun and the four remaining monasteries. All four monasteries are within easy walking distance of each other and can be seen and explored in a single day.

Taxis operating in Cairo and Alexandria will also take visitors to the site, but the cost would be substantial given that it’s a two hour drive from either city. A better option would be to simply check the latest bus schedules, and then to plan your “must see” trip to Wadi Natrun accordingly.

Since not all Egypt package tours include a visit to the monasteries at Wadi Nutrun, it’s advisable to talk to one of our tour consultants prior to travelling to Egypt, and specify that you would like to have a trip to Wadi Natrun included in your tour f it hasn’t been added already.

Egypt has so much to offer tourists, but in order to get the most out of your visit, it really is advisable to book your Cairo tour packages or more expansive Egypt tour packages through a company which has a solid reputation, coupled with many years of relevant experience. 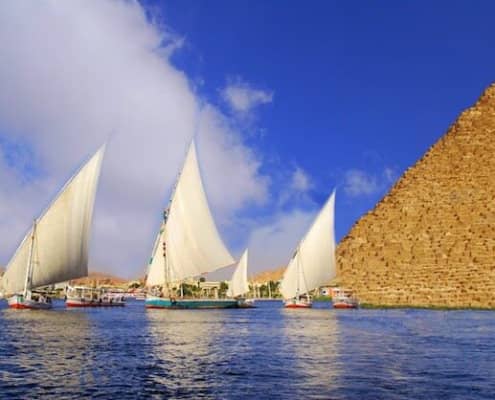