The best time to visit Egypt pyramids would be from December to February if you want to enjoy cooler temperatures. If you want to avoid crowds, visit during the low season from May to September. 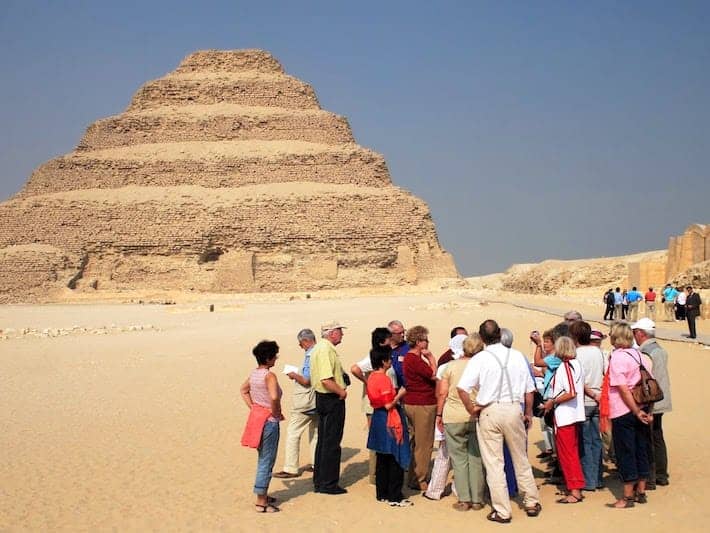 What Is The Best Time To Visit the Pyramids in Egypt?

December, January and February are the winter months in Egypt, and also the country’s peak tourist season. While the weather is delightfully cool at this time of year, you can expect to encounter large crowds of tourists, not only at the pyramids, but also at other major tourist attractions like the Abu Simbel Temples, Karnak Temple, Luxor Temple, etc.

If you want to avoid large crowds, the best time to visit the Giza Pyramids would be as soon as the site opens at 08h00. Tour buses full of tourists usually start arriving at around 09h00. If you are not an early bird, you could try visiting in the afternoon, bearing in mind that the site closes at 16h00 in winter and 17h00 in summer.

The weather is not as mild or as cool as it is during the peak tourist season, but it is also not unbearably hot. Also, the large crowds of tourist either haven’t arrived yet, or else they have already left.

If you want to enjoy pleasant weather while at the same time avoiding large crowds of tourists, the best time to visit Egypt pyramids would be during the first two or last two months of the high season

In October and November, average daytime temperatures are around 29 degrees Celsius (85 degrees Fahrenheit). At this time of the year, the weather is great and the huge crowds have not yet arrived, but it is now the high season, so expect everything to cost more. Don’t worry though, tickets for the pyramids cost the same, regardless of when you decide to visit.

During the last two months of the high season (March and April), the weather is getting warmer but it is still pleasant. Strong winds are quite common at this time of the year. Sandstorms outside of the major cities also often occur, and these can occasionally last for two or three days. However, this is not something you need to worry about when it comes to visiting the Pyramids of Giza.

Visiting the Pyramids during the Low Season

The low season in Egypt runs from the beginning of May to the end of September. While ticket prices for Egypt’s various pyramid complexes don’t cost any less during the low season, everything else related to tourist is cheaper, including hotel prices.

Many, if not most of Egypt’s tourist attractions, including the pyramids, are all but deserted at this time of the year. If you want to avoid crowds of tourists and you can tolerate the heat, this would be the best time to visit Egypt pyramids.

The best time of day to visit the pyramids or any other popular tourist sites during the summer months would from 08h00 to 10h00. By visiting early, you avoid being out in the sun during the hottest hours of the day.

Tips for Visiting the Pyramids in Egypt

If you are planning a trip to Egypt, the Pyramids of Giza are probably at the top of your bucket list. Here are a few tips to keep in mind when visit these ancient attractions:

1. Do Not Attempt to Climb the Pyramids

Whether you are visiting the Giza necropolis, the Saqqara necropolis, or the Dashur necropolis, do not attempt to climb any of the pyramids. Doing so is illegal and it can result in a 3-year prison sentence.

Loose fitting lightweight clothes made from breathable fabrics are best for visiting the pyramids in Egypt. Also, leave your flip-flops or your sandals at your hotel. You will be doing quite a bit of walking, so wear comfortable shoes.

Try and get to the pyramids as close to opening time as possible. This is the best time to visit Egypt pyramids. By visiting early, you can avoid the heat and the crowds.

Summary: What Is The Best Time To Visit the Pyramids in Egypt?

If cool weather is important to you and you don’t mind large crowds of tourists, Egypt’s winter months are the best time to visit Egypt pyramids. If you don’t mind warmer weather, and you don’t want to be surrounded by large crowds of tourists, consider visiting the pyramids during one of the two shoulder seasons. If you are a weather-hardened traveler who doesn’t want to see any other tourists, then the summer months would be the best time to visit Egypt pyramids.

Ready for a Dream Vacation?

We have a superb range of Egypt tour packages, including Egypt pyramid tours. Our tours are private tours that include deluxe air-conditioned transport with private driver and an English-speaking Expert guide.

Find and book your dream vacation in the Land of the Pharaohs now, or use our user-friendly Travel Planner to design you own unique tour from scratch.