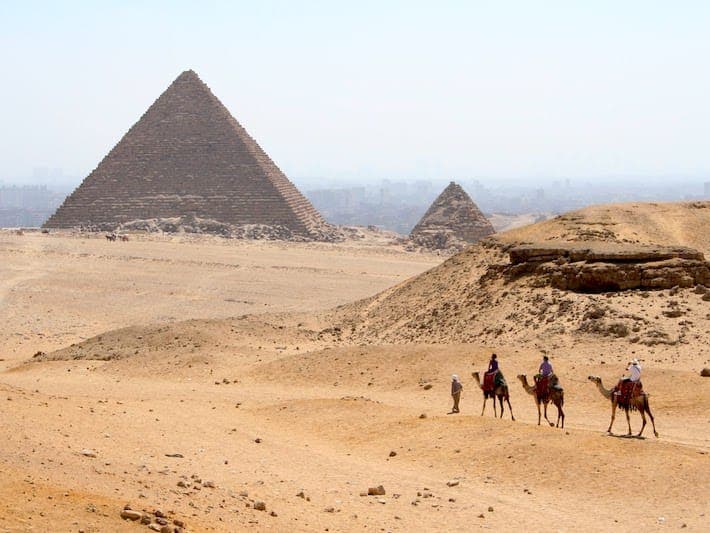 Visiting the Pyramids in Egypt

To date, 118 Egyptian pyramids have been identified. Of these, 80 were constructed in the ancient Kingdom of Kush which is today, Sudan. The remaining pyramids found in modern day Egypt were nearly all built for pharaohs and their consorts.

The Pyramids of Giza on the outskirts of Cairo are Egypt’s most famous pyramids, and also Egypt’s most visited tourist attraction. The world famous Sphinx is also located at the same ancient royal burial ground.

The largest pyramid at the Giza pyramids complex belonged to Pharaoh Khufu. Known as the Great Pyramid, the Pyramid of Khufu is one of the 7 Wonders of the Ancient World, and the only one still standing and mostly still intact.

Inside the Pyramids of Giza

The three iconic Pyramids of Giza are usually all open to visitors, meaning that visitors can actually go inside the pyramids. However, the standard entry ticket for the site does not include entry to the pyramids. Visitors who want to see inside the pyramids need to purchase additional tickets at the ticket gate.

Since all three pyramids were looted in antiquity, there really isn’t much to see in any of them other than empty passageways, chambers, and lots of stairs.

The Step Pyramid of Pharaoh Djoser at Saqqara is believed to be the first pyramid ever built in Egypt. It is also the world’s oldest major stone structure. After a 14-year-long restoration period, the Step Pyramid is finally open to visitors again. Most of this pyramid complex is located underground. If fact, a labyrinth of underground passageways, tunnels and chamber cover an area of more than 6 square kilometers.

There are also several other ancient structures at the site. One could easily spend an entire day exploring the Saqqara necropolis. At the time of writing, entrance tickets for the ancient Saqqara burial ground cost the equivalent of around US$9 for adults. Students are charged half the adult price. Your ticket also includes entry to the pyramid and the onsite Imhotep Museum. A visit to this ancient royal burial ground is featured in many tours, including many of our own Egypt tour packages.

The Red Pyramid and Bent Pyramid at Dahshur

A total of 8 pyramids have been discovered at the ancient Dahshur necropolis, but the site is most famous for its Red Pyramid and its Bent Pyramid, both of which are open to visitors. As with the Step Pyramid, there is far more to see in these two pyramids than there is in the Pyramids of Giza.

At the time of writing, entrance tickets for the necropolis cost the equivalent of around US$3.25 for adults, and half price for students. Your site ticket includes entry to both the Red Pyramid and the Bent Pyramid. The Dashur necropolis is best visited as part of a day tour from Cairo.

Can I Visit the Pyramids in Egypt without a Guide?

Yes, you can visit Egypt pyramids without a tour guide. Countless tourists visit the pyramids in Egypt without tour guides. However, for the richest and most rewarding experience, we highly recommend visiting the pyramids with a professional tour guide who can tell you all about their fascinating history. A tour guide can also see to it that you are not over-charged should you wish to go for a camel ride at the pyramids.

Many tour operators in Cairo offer group tours to the pyramids and also private half-day tours. In our opinion, a half-day private tour that includes your own Expert guide and private driver is by far the best option. You get picked up from your hotel, you get an in-depth tour of the site, and when your tour ends you are dropped off right outside your hotel.

If you also want to see Egypt’s other famous pyramids such as those at Dashur and the Step Pyramid at Saqqara, then you have even more reason to book a pyramids tour, but this would need to be a full day tour.

Yes, you can get to the Giza pyramids using taxis, buses, and the Metro. If you use buses or the Metro, you will still need to rely on taxis for part of the journey. For example, the Metro will take you from central Cairo to Giza, but then you will need to take a taxi or a bus to the actual pyramids.

Using public transport to visit the Dashur Pyramids and the Step Pyramid is not possible. To visit these pyramids from Cairo you will need to rely on taxis or book a guided tour.

Summary: Can I Visit the Pyramids in Egypt?

Not only can you visit the pyramids in Egypt, you are actively encouraged to visit the pyramids, and if you have the time and resources, we would recommend that you visit all three sites which have been mentioned in this post. If or when you do visit, keep in mind that it is illegal to try and climb any of the pyramids.

If you are ready for a visit to Egypt’s legendary pyramids and its breathtaking ancient temples and tombs, check out our superb range of Egypt tour packages today or even create your dream trip to Egypt right now.