Enjoy a journey through time on board the prestigious 5-Star Movenpick Prince Abbas; a journey through ancient Nubia, and do it while living in the lap of luxury. When you book a 5-Day Aswan to Abu Simbel Lake Nasser cruise on this boat, you are booking a cruise on one of Egypt’s finest cruise ships. Enjoy all the perks and amenities that you would enjoy in any luxury hotel; enjoy world-class cuisine and a level of hospitality that is second to none.

Explore the treasures of Nubia the way they should be explored, from the ancient temples on the shores of Lake Nasser near Aswan, to the magnificent rock temples of Abu Simbel that were built by Pharaoh Ramesses II. Discover the wonders that wait at Amada, and Wadi El Sebou, and leave at the end of your journey with memories you will cherish forever. As with all of our Nile cruises, lifetime memories are guaranteed. 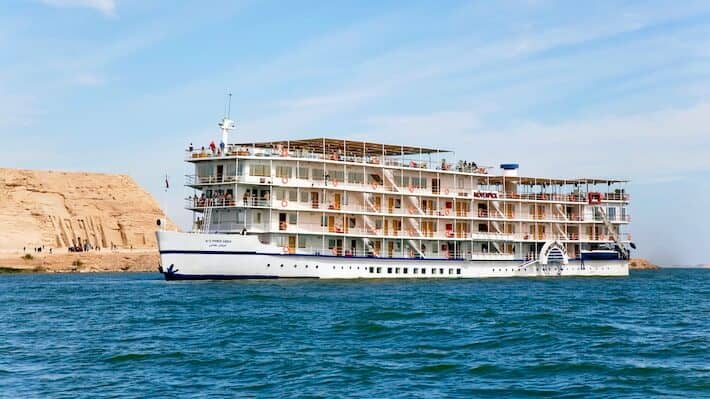 On arrival in Aswan, you will be met at the airport or the railway station by one of our friendly tour representatives who will then escort you in a clean and modern air-conditioned vehicle to the place where you will be boarding the wonderful 5-Star luxury Movenpick Prince Abbas cruise ship.

Shortly after boarding, you will be served your first delicious lunch in the vessel’s beautifully decorated dining area, and then you will have the rest of the day to enjoy as you wish. This will be a perfect opportunity to get settled into your cabin, or a chance to enjoy any of the ship’s world-class amenities, while also enjoy a pleasant afternoon tea which will be served at around 15h00.

In the early even, a delightful dinner will be served on board, and then you will have some more free time. Retire to your luxury cabin for an early night; enjoy the ship’s many amenities, or relax out on the deck, sipping refreshments under the stars. Tonight you will be staying on board in Aswan.

Wake up to a wonderful onboard breakfast and then get ready for your first unforgettable excursion, a visit to the Ancient Temples of Kalabsha that were built in 30 BC. This fascinating site is located a little bit to the south of Aswan High Dam, having been moved in its entirety from its original location. This was done in order to save it from being lost forever to the rising waters of Lake Nasser following the construction of the High Dam.

Once you have had ample time to explore this remarkable Nubian site, you will return to the Prince Abbas, and it will then begin cruising towards Wadi El Seboua. Enjoy another first-class lunch on board, followed by afternoon tea at about 15h00, and a cocktail reception party shortly before dinner.

Enjoy a delicious dinner on board, and then spend the rest of the evening relaxing or enjoying the ship’s many amenities before retiring for a good night’s sleep on the water at Wadi El Seboua.

Wake up and enjoy a fantastic onboard breakfast, and then it will be time to visit the Valley of Lions to explore the ancient Wadi El Seboua temples. These are two “New Kingdom” Egyptian temples which were built during the reign of Pharaoh Ramses II of the 19th Dynasty. While these temples may not look very impressive at first site, they do have an abundance of fascinating features which will become apparent once you start exploring the site.

Like a number of other ancient relics seen along the shores of Lake Nasser, these temples are now located away from their original location, having been moved in order to save them from being flooded by Lake Nasser after the High Dam was completed.

After spending some time at these two temples, everyone will return to the Prince Abbas, and it will then begin sailing to Amada, with a good wholesome lunch being served along the way. At Amada, you will all disembark, and you will visit another three intriguing ancient sites: the Temple Amada; the Temple of Derr, and the Tomb of Pennut.

The Temple of Amada dates back to the time of Pharaoh Thutmose III of the 18th Dynasty, but sections of it were added later by 19th Dynasty rulers, including Seti the 1st and Ramses the 2nd. It was also Ramses the 2nd who built the nearby rock-cut Temple of Derr, which is another site you are unlike to ever forget. Finally, you will explore the indescribable rock-cut Tomb of Penout. All three of these sites are in close proximity to each other after having been moved from their original locations.

After your unforgettable excursion, everyone will return to the ship, where you be able to enjoy some free time before sitting down to another fine onboard dinner. There will be a very enjoyable Nubian show shortly after dinner, and then the rest of the evening is set aside for relaxation. You will be spending tonight on board the ship, on the water at Amada.

As with all days during your cruise, this day also kicks off with a hearty onboard breakfast which you can enjoy while the Prince Abbas is cruising towards Abu Simbel. Along the way, you will stop at Kasr Ibrim, an ancient relic perched on what can only be described as a miniature island. Because of its location, an onshore excursion is simply not possible, but the ship will get close enough for you to take some amazing photos from the ship’s sundeck.

You will then continue on your way, and the Prince Abbas will stop close to the shore near to the Abu Simbel temples, where you will once again be able to take some remarkable pictures. After this, you will enjoy a good lunch on board and then disembark for an actual visit to the Abu Simbel Temples. After the Giza Pyramids, this is the second most recognizable ancient attraction in Egypt. No amount of words could even begin to describe the magic of the two extraordinary rock-cut temples.

Later in the day, you will once again board the ship; you will have some free leisure time, and then it will be time for another mouth-watering dinner. Spend the rest of the evening as you wish, and enjoy a good night’s sleep on the water at Abu Simbel.

Sadly, today marks the end of your 5-Day Aswan to Luxor lake cruise, but before you disembark first sit down to another wholesome onboard breakfast which you can enjoy at leisure while you think all the great things you have seen during your cruise.

What is included in your Movenpick Prince Abbas Lake Nasser Cruise holiday:

What is not included in your MS Movenpick Prince Abbas Lake Nasser Cruise holiday:

Prices are quoted per person in US$ and are valid until the 30th of September 2023, except during Christmas, New Year and Easter holidays. 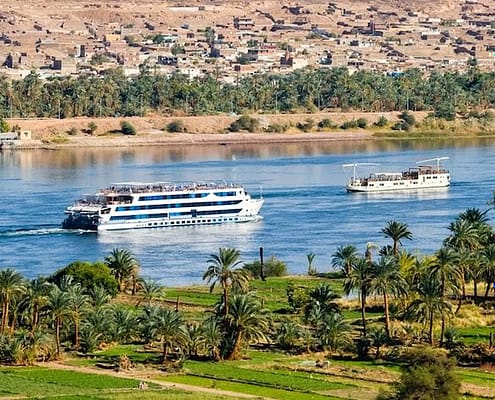 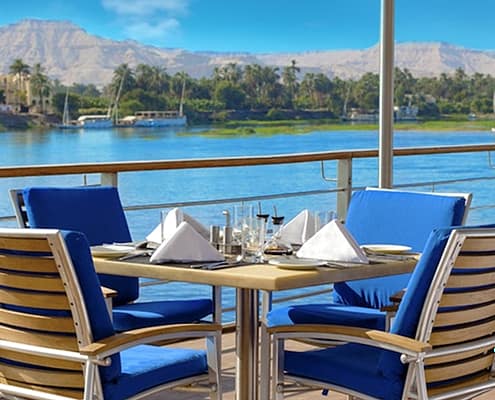 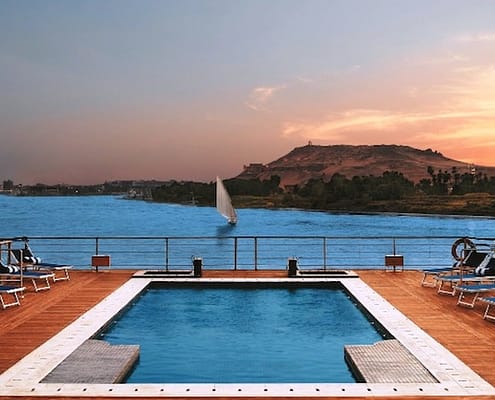 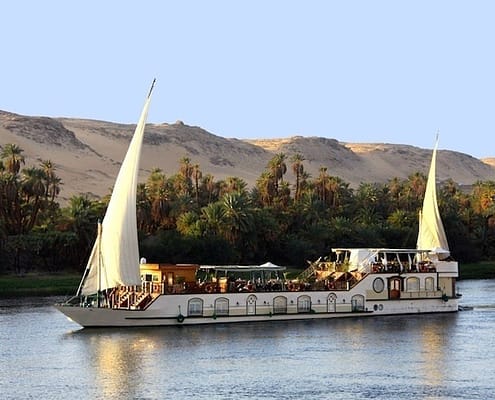 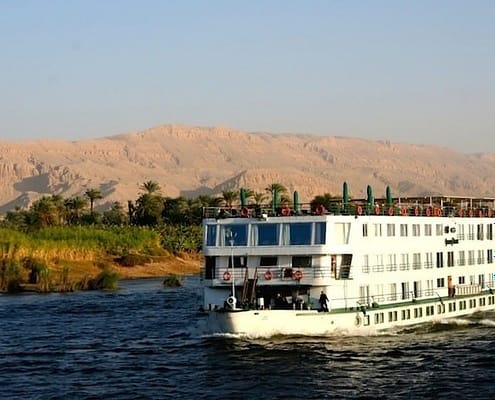 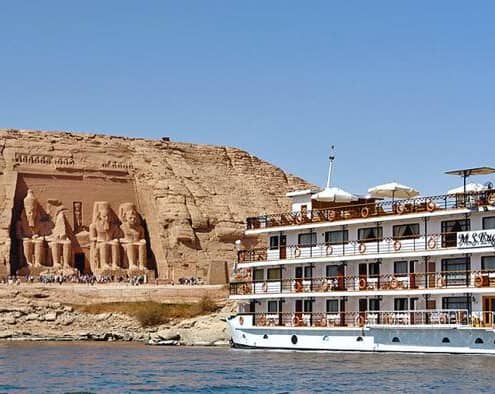