You are here: Home › Jordan › Jordan Tourist Attractions › Folklore Museum Amman And The Museum Of Popular...

Folklore Museum Amman is located in the Roman Theatre, along with the Museum of Popular Traditions, making it possible to explore 3 attractions in one. Our Egypt and Jordan combined tours that include a visit to the Roman Theater will typically also include entrance to the Folklore Museum. 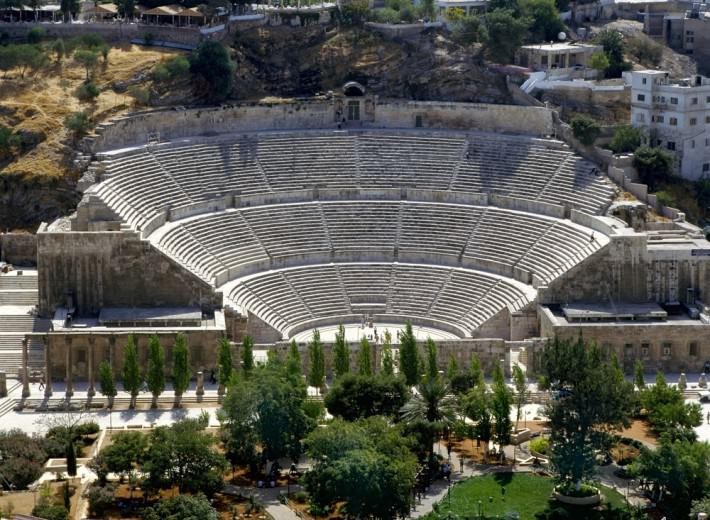 The Folklore Museum in Jordan is part of the Roman Theatre in Amman.

Amman, the capital city of Jordan is essentially built on seven hills (jabals) which are often referred to as the 7 Hills of Amman. Generally speaking, each hill represents a different neighborhood. All the neighborhoods are in turn interconnected by the spine of the city; a road running from the first hill in the East, through to the seventh hill to the West.

In the past, there were eight traffic circles along this route although they have since been replaced by more modern junctions controlled by means of traffic lights. Nonetheless, many guidebooks, and especially the older ones, still make reference to the eight circles. For example, if you wanted to get to downtown Amman, you might be directed to the “first circle”.

Killing Three Birds With One Stone

Just a short walk from downtown Amman, if heading East, visitors will come across the city’s most obvious and most noticeable historical attraction, which is an ancient Roman theater. The same site is also home to two other Jordan tourist attractions: the Folklore Museum Amman and the Museum of Popular Traditions.

The Roman Theater was constructed between 138 and 161 CE under the orders of Antonius Pius who was ruler at the time. The theater is actually still used to this day for hosting certain events, although it is primarily a tourist attraction, and home to two of the city’s museums.

Because all of our Egypt-Jordan tours include a stay in Amman, these museums can easily be visited even if they are not featured in a particular tour itinerary.

Folklore Museum Amman is located in the right wing of the Roman Theater. The museum certainly cannot compete with some of the country’s other museums in terms of historical artifacts, but then again, that was never the intention in the first place. It is however a charming place to visit and the fact that it’s located in such an ancient theater, only serves to boost its charm even further.

As one might expect, the main purpose of the Folklore Museum Amman is to afford visitors with some insight to the way in which locals have been living their lives through the years.  History at the museum generally covers from the early 19th century to the early 20th century. Virtually all the artifacts on display represent three different Jordanian cultures:

Folklore Museum Amman was commissioned by the Jordanian Department of Antiquities, and first opened its doors to the public in 1975. Displays consist mostly of clothing and traditional costumes worn by the three different cultures, along with a large collection of cooking utensils, tools and etc.

All in all, the museum offers visitors a good opportunity to see just how styles and fashions have changed over the course of a century, and how daily life in general has changed within each of the three cultures.

The museum is home to countless artifacts collected from all parts of the country, as well as a Palestinian Folk Heritage collection. There are five exhibition halls in total, with each hall dedicated to a different area of interest.

Moving on to the third exhibition hall, visitors are greeted by a wonderful display of traditional Palestinian costumes and other relevant artifacts. The fourth hall is in turn where things like pots and cooking utensils are displayed, along with a fascinating collection of bridal dresses and silver jewelry. Items on display in this hall also originate from the East Bank and West Bank.

The fifth and final exhibition hall is located in a vault within the theater, and is home to an intriguing collection of mosaics that were collected from various Byzantine churches in the areas of Jerash and Madaba.

If you would like to explore Jordan and visit places like Folklore Museum Amman, you can easily do so by exploring our Egypt and Jordan Tours for a deal of a lifetime.