You are here: Home › Jordan › Jordan Tourist Attractions › Abu Darwish Mosque – A Gem on One of Amman’s 7 M...

Abu Darwish Mosque might not be one of the most popular or most well-known tourist attractions in Jordan, and it might not be a standard fixture in our Egypt and Jordan tours, but it really is well worth a visit if you get the opportunity. 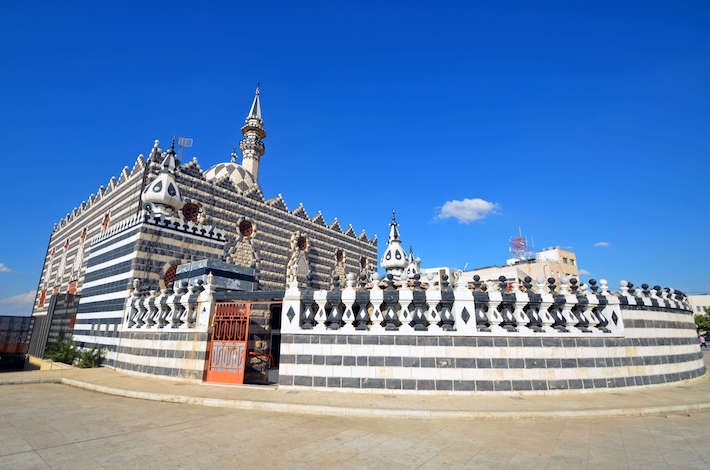 Compared to many other Jordan tourist attractions, the Abu Darwish Mosque is a relatively new complex. The design is beautiful, yet also very simplistic, but in a very welcoming sort of way. 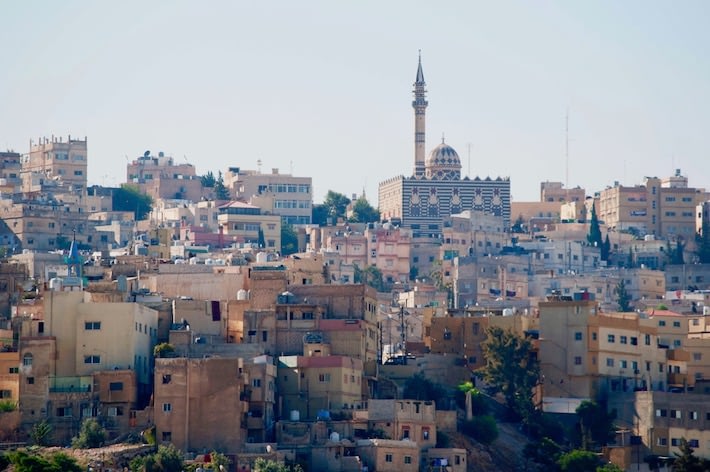 Skyline of Amman and view of the Abu Darwish Mosque.

The Abu Darwish Mosque is visible from a distance and was only built in 1961, meaning that it is considerably younger than many of the other mosques one can see in Jordan and throughout the Middle East.

Construction of the mosque was funded by Abu Darwish (Mustafa Hassan) and covers a total area of roughly 2,500 square meters.

The land on which the mosque stands also used to belong to Mustafa Hassan.

Mustafa Hassan also designed the Abu Darwish Mosque, while one of the best local calligraphers was brought in to do all the various paintings and inscriptions.

Nearly all building work was done by Palestinians from a village on the West Bank near Jerusalem.

Prior to the Abu Darwish Mosque being built, the Ashrafiyeh area of Amman was almost completely uninhabited, although there was a hospital located on the mount.

In fact, Abu Darwish had two lounging rooms built on the land he owned after noticing that there was nowhere for women to rest when they traveled to the hospital to care for their sick relatives.

Things to Consider When Visiting the Mosque

The Abu Darwish Mosque contains a smallish library, as well as a small museum but there is no guarantee that visitors will be allowed to see the museum.

As a general rule, the mosque is not open to non-Muslims. However, many tourists, including non-Muslim tourists, have been able to have a look around inside the mosque.

If you book one of our Egypt and Jordan tours and you want us to include a visit to this site, it is worth noting that during prayer times, the site is strictly a Muslims-only site. Outside of prayer times, local tour guides can more often than not arrange for personal tour of the mosque’s interior.

If you are granted access and given a tour, all communication will be in Arabic, so having an English speaking guide with you is more or less essential.

While the interior is nowhere near as elaborate as what many older mosques are, it is still a very beautiful mosque to visit, and even more so if you can get inside.

As with all mosques, visitors are expected to dress conservatively, and female visitors will be expected to cover their hair with a scarf.

Because there are so many other fascinating tourist attractions in and around Amman, the Abu Darwish Mosque is not included in all of our Middle East tour packages or our Egypt and Jordan combination tours.

However, because all our tours can be tailored and customized to meet the exact needs of our clients, a visit to this beautiful mosque can easily be added to your preferred tour package.

With its somewhat Syrian-styled design and architecture, along with its uncomplicated simplicity, the Abu Darwish Mosque a great place to visit, particularly if you are able to enjoy a private guided tour of the interior.

As an added bonus, visitors can also enjoy spectacular views of the city below.