Yes, Petra and the whole of Jordan for that matter, is safe to visit. As of the time of writing, there were no travel warnings regarding Petra but be mindful of reckless locals on camels and horses. 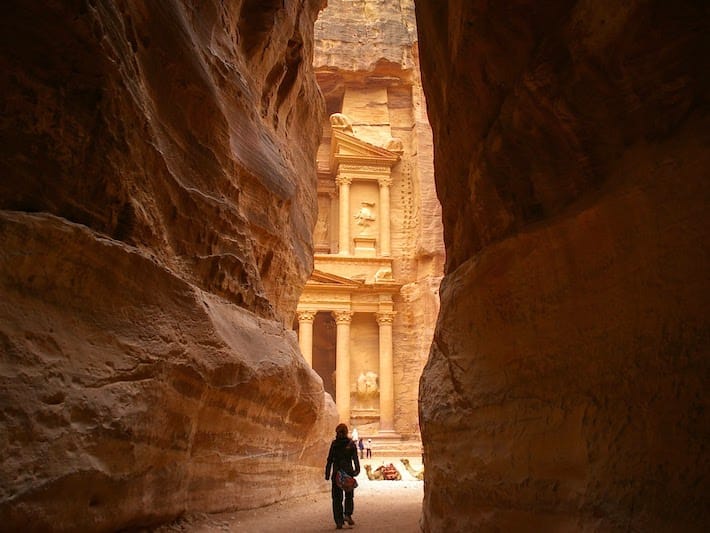 The Sig (a long, narrow gorge) in Petra

Is Petra Safe to Visit?

Jordan is considered to be a safe and stable country. Crime in Jordan is surprisingly rare, and in fact, the crime rate has been decreasing year on year for the past several years. Petty crime does exist, but even this rarely affects tourists, and when it does, it is usually in places like Amman, the country’s capital city.

Thanks to ongoing efforts of the Jordanian government, Jordan is considered to be a safe country to visit. In a nutshell, you can visit Jordan’s tourist attractions without having to worry too much about your personal safety.

Is it safe to travel to Petra in Jordan on your own or should you visit as part of a tour group? Unless you prefer traveling as part of a group, it is perfectly safe to visit Petra on your own. Group tours are immensely popular, but we believe that you’ll have an even better experience if you visit on your own, but with a tour guide to show you around.

What and Where is Petra?

The Rose City of Petra is a rock-hewn ancient city that was founded by nomadic Nabatean Arabs at some point in or around the sixth century BC. It is a UNESCO World Heritage Site which has been designated as being one of the Seven Wonders of the Modern World. It is without any doubt one of the world’s most breathtaking archaeological sites, and by far and away, Jordan’s premiere tourist attraction.

The ancient city of Petra is located in southern Jordan, approximately 230 kilometers south of Amman (about 143 miles).

Petra was originally a major trade hub that went on to become the Nabatean capital. The Nabatean Arabs were eventually driven out by occupying forces who later themselves abandoned the city. After the city was abandoned, it all but disappeared into obscurity until it was rediscovered by Johann Ludwig Burckhardt, a Swiss explorer.

So, is Petra safe to visit nowadays? Yes, as mentioned earlier, you can visit the Lost City of Petra without having to worry much about your personal safety.

Petty crime such as pick pocketing and/or bag snatching is virtually unheard-of Petra. To be honest, locals riding around on horses or camels and not paying attention are a bigger threat than petty criminals.

While it is highly unlikely that you will become a victim of crime while you’re at the site, you can still get seriously injured if you take unnecessary risks. As is always the case when one is traveling, a little bit of common sense can go a long way in keeping you out of harm’s way.

Despite the fact that tourists are no longer allowed to climb some of the structures, some of these areas are not fenced off. As a result, many tourists continue to do so in order to take photographs, and of course, selfies.

One only needs to go on Google and search for information about Petra, and you will see images of tourists standing right on the edge of cliffs, either taking photos of posing for photos. This is reckless and dangerous. One slip and you could be seriously injured or even fatally wounded.

Visiting Petra as a Woman Traveler

Is it safe to go to Petra Jordan as a woman traveling on her own? Yes, Jordan, including Petra and the nearby town of Wadi Musa is very safe, even for women traveling on their own. You may encounter one or two local Bedouins who try to convince you to hire their camel or horse, but a firm “no thank you” is usually enough to get them off your back.

If you are going to be staying at Wadi Musa for a night or two, feel free to go out and explore your surroundings in the evening. However, if you are on your own, it is probably best that you don’t stay out too late, and of course, you should avoid dark and/or deserted areas late at night.

Should you Hire a Tour Guide?

Is Petra safe to visit on your own, or is it better to hire a tour guide. Whether or not to hire a tour guide all comes down to personal choice and your travel style. As we have mentioned already, you have nothing to worry about in terms of personal safety when you visit Petra, so in this regard, it is not necessary for you to hire a guide.

With the above having been said, having a local guide accompany you around the site can make for a more rewarding experience. However, unlike many of the ancient monuments in Egypt, Petra can be enjoyed even without a tour guide.

If you only wanted to see Petra’s top features such as The Treasury, Colonnaded Street, the Monastery, and so on, then it would probably be best to have a guide with you. If, on the other hand, you want to have the freedom to stroll around and explore the entire site for as long as you want, then it really isn’t necessary to pay for a guide. Instead, simply pick up a brochure at the visitor center when entering the site.

If you stay in the town of Wadi Musa, you have the advantage of being able to visit Petra first thing in the morning once the site opens. You also won’t have to contend with a relatively long drive, because most of the hotels in Wadi Musa are within walking distance from the site.

On the downside, we feel that most restaurants and hotels in Wadi Musa are overpriced. Most of the hotels are also not of a very high standard, including those which are billed as being luxury hotels. All in all, you can get far better value for your money if you choose to stay in Amman instead.

Petra in Comfort and Style

There is no denying the fact that Petra is one of the most breathtaking archaeological sites on the planet. Anyone and everyone who visits Jordan should make a point of visiting Petra during their stay. People visiting Egypt should also seriously consider visiting Petra before flying back home.

If you think Petra looks magnificent in the pictures you have seen, we can assure you that it is a thousand times better when you visit in person. For this reason, you will see Petra featured in each and every one of our high-quality Egypt and Jordan tour packages.

Are you ready for a holiday of a lifetime? If you are, contact us now to view our epic range of unforgettable Egypt and Jordan travel packages or to book your once-in-a-lifetime dream vacation today.

September 14, 2017
Enjoy a vacation of a lifetime with our 15-day Egypt, Jordan, Israel Itinerary, complete with a Nile cruise; an unforgettable journey through time.
END_OF_DOCUMENT_TOKEN_TO_BE_REPLACED

September 12, 2017
Secure a holiday deal of a lifetime with a flawless 15-day Egypt, Jordan, Dubai Tour package which is both amazingly affordable, and totally unforgettable.
END_OF_DOCUMENT_TOKEN_TO_BE_REPLACED

September 12, 2017
Visit Egypt’s finest attractions and explore some of the oldest human dwellings ever discover when you visit Jordan with our magical 14 days Egypt and Jordan Package Tour.
END_OF_DOCUMENT_TOKEN_TO_BE_REPLACED

September 12, 2017
Three diverse countries; many different cultures and millions of unforgettable memories: A once in a lifetime 13 Day Tour of Egypt, Jordan and Israel.
END_OF_DOCUMENT_TOKEN_TO_BE_REPLACED

July 23, 2017
Immerse yourself in the ancient wonders of Cairo; relax with a Nile cruise and explore the historical sites of Jordan: A quality Nile cruise and Jordan tour.
END_OF_DOCUMENT_TOKEN_TO_BE_REPLACED

July 23, 2017
Enjoy a Cairo, Abu Simbel, Nile Cruise and Jordan tour which is insanely affordable; totally flawless, and more rewarding than you could ever imagine.
END_OF_DOCUMENT_TOKEN_TO_BE_REPLACED

April 10, 2014
Immerse yourself in the history of bygone civilizations, from the giant Pyramids of Giza in Cairo, to the ancient rock-cut Lost City of Petra in Jordan.
END_OF_DOCUMENT_TOKEN_TO_BE_REPLACED