As with Jordan’s other Desert Castles, Qasr Amra is located in close proximity to the main east to west highway, just a short drive from Amman, the country’s capital.

Unlike some of Jordan’s other Desert Castles such as Qasr Al-Kharana which were never really castles at all, Qasr Amra did actually share the site with a castle. However, only the foundations remain today. 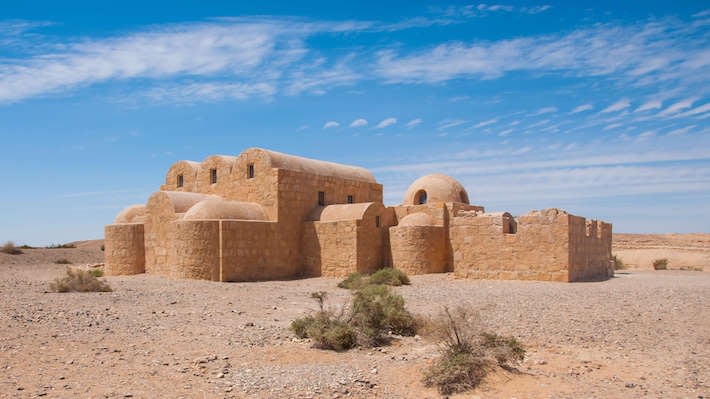 Qasr Amra is one of the most important examples of early Islamic architecture.

What sets Qasr Amra apart from other desert castles, are the beautifully preserved frescos which can be seen inside the complex, particularly on the ceilings.

Qasr Amra’s frescos, along with its convenient location, have result in the site becoming very popular among tourists. It might not be one of the top Jordan tourist attractions, but it is certainly a very popular one, and one which is well-worth a visit if you have the time, or if you feel like getting away from the main tourist trail for a while.

What Are Jordan’s Desert Castles?

Jordan’s Desert Castles are essentially a collection of Umayyad palaces, fortresses, and other fortified buildings.

While there may be the odd exception, it is safe to say that all of these complexes were built between 660 and 750 AD by various caliphs of the Umayyad Dynasty.

Most were built in arid and semi-arid regions, although some were built in cities and along important trade routes. Interestingly, several of them were never completed.

All of Jordan’s Desert Castles are located in the country’s north-eastern region, but many more such buildings exist in Syria, Israel, and on the West Bank.

Our existing range of Egypt and Jordan tours typically don’t feature Jordan’s desert castles. If you would like to visit some of these fascinating structures, we would recommend adding at least one or two days to your preferred itinerary for visiting some of the best ones.

Qasr Amra was built by Walid II at some point between 723 and 743 AD. It is believed that he had the complex built prior to becoming an Umayyad caliph in 743 AD. His reign ended the following year in 744 AD when he was assassinated.

Unlike several of the other Desert Castles, Qasr Amra was essentially a part of a larger fortress-type structure, but nothing of the fortress remains, other than its foundations.

Qasr Amra itself, however, never served any sort of military purpose. Instead, it was built to serve as a royal retreat.

After being abandoned, the remains of Qasr were all but forgotten until it was rediscovered in 1898.

Some of the paintings and frescos were later made famous by an Austrian artist, and in 1970 a team of Spanish archeologists set about restoring the frescos.

Later, in 1985, Qasr eventually received the UNESCO World Heritage Site status it so much deserves, considering that it is considered to be one of the most important examples of early Islamic architecture and early Islamic art.

Located some 85 kilometers from Amman, on the northern side of Highway 40, visitors are greeted by a large securely fenced off area.

Inside this enclosure is an unpaved parking area for cars and tour buses, and a small visitor center which is responsible for collecting fees. Qasr Amra itself is located below a small rise/hill just a short distance away.

Unfortunately, before a barbed wire fence was erected around the site, vandals had a free run of the place, and as a result, several of the paintings and frescos got cover with graffiti. However, restoration work got underway some time ago already and great progress has been made.

As with nearly all historical monuments in Jordan, a visit to Qasr Amra is so much more special if you go in the company of an experienced guide. At the time of this post being written, there were no local guides available at the site itself.

Jordan’s Desert Castles represent the rise and demise of the Umayyad Dynasty, an interesting and fascinating time in the history of this region of the world.

Those castles, which have to some extent managed to survive the ravages of time and war, are today such wonderful examples of early Islamic art and architecture. Visitors who choose to visit Qasr Amra will be visiting one of the best such examples.

At Egypt Tours plus, all of our  epic Egypt and Jordan tours are fully customizable. As such, even if your preferred tour itinerary doesn’t include a visit to Qasr Amra, it can always be added on request. 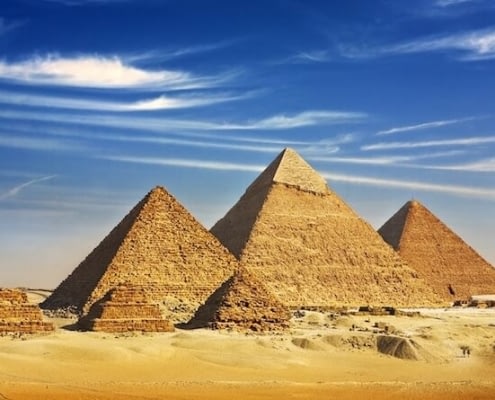