Edfu Temple is a Greco-Roman temple constructed during the Ptolemaic dynasty, and it is without question one of the best preserved ancient temples in Egypt, and one which is also featured in many of our epic Egypt tour packages. Even though this site is often named as one of the very best Luxor tourist attractions, the Temple of Edfu is actually located on the west bank of the Nile River near the city of Edfu. While Egypt is home to many spectacular ancient temples, it would take a lot to beat Edfu Temple, and especially in terms of preservation, since it is considered by many to be the country’s best preserved temple.

The Temple of Edfu is a Greco-Roman temple that was constructed during the Ptolemaic dynasty. It was built along with a number of other notable temples, including Dendera; Esna; Kom Ombo and Philae. Its vast size and extravagant design is a clear indication of the country’s prosperity at the time. It was dedicated to the falcon god Horus, and it is in fact the biggest “Horus” temple ever constructed.

A Brief History Of Edfu Temple 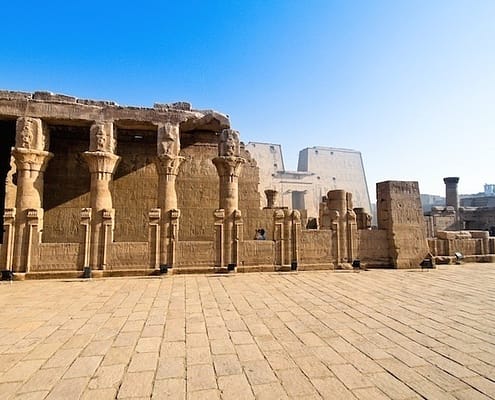 In 391 BX Theodosius I of Rome declared all non-Christian worship illegal throughout the Roman Empire. As a result, Egyptians were no longer able to use the temple for religious purposes. While the Romans never set out to destroy the temple, many of its finest artifacts and sculptures were destroyed. Others were seriously disfigured by the Roman Christians who by that time had seized control of Egypt. To this day, visitors to the site can still see visible evidence of this destruction. This includes the blackened ceiling within the hypostyle hall. Historians believe this was caused by fires which the Christians might have started in an attempt to eradicate any traces of paganism.

At one point in history, Edfu Temple was also buried to a depth of 39 meters as a result of shifting sands and the behavior of the nearby Nile River. During this period several homes were built over the grounds of the temple, and archeologists were later forced to re-identify the temple. Eventually a major sand clearing project got underway, and the majestic Edfu Temple was once again introduced to the world.

As mentioned earlier, Edfu Temple is still very much intact and definitely one of the best-preserved archeological discoveries in all of Egypt, and it features prominently in nearly all of our Nile River cruises.

Some of the main highlights at the temple include the countless inscriptions visible on its walls, as well as the inscriptions and reliefs that adorn the entrance to the temple which is by way of a massive pylon measuring 36 meters high. The pylon itself is also decorated with various reliefs, or sculptures depicting Ptolemy XII conquering his enemies. Also, the two twin granite larger than life falcons guarding the gateway to the temple are really a sight to behold.

The temple is well geared for tourism and as such, visiting the site makes for a really pleasant experience. If you are planning on booking one of our Nile cruises from Luxor to Aswan, or you’re considering booking one of our Nile cruises from Aswan to Luxor, the chances are a visit to Edfu Temple will probably already be included in your tour itinerary.