This is a city known for its natural and manmade beauty. El Gouna tours always include the extensive canal system, one of the cities distinctive features, as well as the best of the Red Sea and often times even some ancient sightseeing!

It is a popular Egypt vacation resort located on the Red Sea in Egypt. It is just a few miles away from the Hurghada International Airport. The entire area of El Gouna is owned by Orascom Hotels and Development.

What is El Gouna Famous for?

What kind of activities can you look forward to on El Gouna tours? First know what El Gouna is famous for. It specializes in water sports; activities like scuba diving, windsurfing, kitesurfing, waterskiing, parasailing and snorkeling are the most popular past times among vacationers and tourists. You will see most of this activity at major beaches like Zeytuna Beach, which has its own island, and Mangroovy Beach. (Which contrary to popular belief, was not named by a hippie)

One of the most fascinating aspects of El Gouna is its canal system, which actually allows many of its residential homes to have their own strip of beach.

Aside from the main beaches, become acquainted with El Gouna’s three major commercial areas: downtown El Gouna, Tamr Henna Square and Abu Tig Marina. There are over a dozen quality hotels in the area that provide accommodation and a few that give guided tours of the area.

Golfing is a popular sport worldwide and El Gouna boasts a golf course design that was created by golf gurus Gene Bates and Fred Couples. If you like arts and culture, then there is a museum in the area with 90 exhibits including Egyptian replicas and famous contemporary paintings by Hussein Bikar.

A Popular Wedding and Honeymoon Location

El Gouna is a popular honeymoon location because of its many sparkling beaches, its isolated and romantic islands, and its first class hotel and dining services. Further sweetening the deal is the fact that many of these hotels offer entertainment packages, perhaps even escorted tours around El Gouna and other locations in Egypt.

El Gouna is actually a great resort for weddings, as nearly every hotel offers an extra special beach ceremony and reception. There are also many high-class restaurants and five star hotels. Imagine going to an exotic location and being able to experience the beaches and services of a foreign land. It’s a trip that will be remembered for a lifetime!

Other activities you can look forward to include horseback riding, spas, hiking and go-karting. Whether you have a family or just want to enjoy a quick three-day weekend getaway, El Gouna is a great place to add on to your Egypt tour packages list. 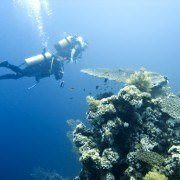 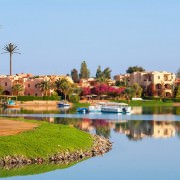 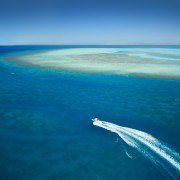