Madaba City of Mosaics and the St. George Greek Orthodox Church are popular attractions that feature in many of our Egypt and Jordan combined tours. and the city has provided historians with an unprecedented amount of insight regarding the area’s history. 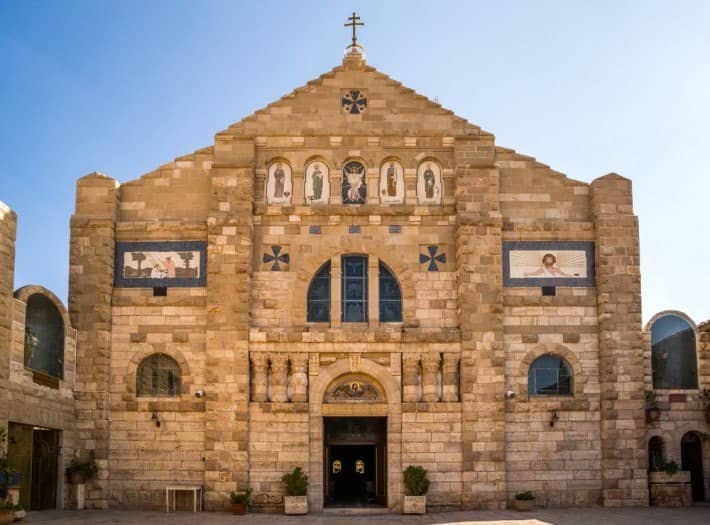 St. George Greek Orthodox Church in Jordan is located in Madaba, the City of Mosaics.

From the ancient ruins of the Rose City of Petra which were once home to the powerful Nabataean Kingdom, to the Roman Theatre in Amman, Jordan has more than its fair share of historical offerings. One never needs to venture very far to get from one historical site to Madaba City of Mosaics in Jordan is no exception.

Madaba, The Jordanian City Of Mosaics

Amman, the capital of Jordan, is often the first port of call for arriving tourists, and as many can attest to, Amman is a fascinating city to visit. It’s often said that the Roman Theater in Amman is the highlight of the city, but in truth, the city has a lot more to offer for those who are willing to go out and look.

When you’ve seen all you want to see in Amman, a short 30 kilometer journey is all it takes to reach Madaba City of Mosaics. If you are using a guidebook, or you’ve been looking at a few tour related pamphlets that show Jordan tourist attractions, you’ll almost certainly have seen mention of a place called Madaba City of Mosaics, or as it’s officially known, Madaba.

The St. George Greek Orthodox Church in Madaba was built in the Byzantine-era style, and is best known for the spectacular mosaic which is preserved in the floor of the church. The mosaic dates back to the 6th century, and it consists of around two million differently colored individual pieces of stone. Even if you are not an art lover, Madaba City of Mosaics is well and truly something to behold.

Interestingly, the mosaic doesn’t only depict the local area. Instead, it’s basically a detailed map that includes Palestine; the entire Nile Delta, as well has the Holy Land (Byzantine Jerusalem). The amount of detail is astonishing, complete with landscapes, mountains; livestock and etc.

Medaba is sometimes called the City of Mosaics because of the sheer number of mosaics which have been discovered in the area. Many of these have provided a great deal of insight with regards to the region’s past, but none more so than the mosaic you’ll see at the St. George Greek Orthodox Church.

Travelers who book one of our Egypt and Jordan tours that include a visit to Mount Nebo and/or the Dead Sea, will typically visit Madaba and this church en-route to the Dead Sea.

Who Needs Pictures When You Have Mosaics?

The mosaic, now known as the “Map of Madaba” was only discovered quite recently, in 1896, and even then, word of the discovery never got out for another year. Once it did however, scholars from around the world were instantly intrigued.

As many people have pointed out, the Map of Madaba provides the only truly accurate scholarly knowledge concerning the actual layout of Byzantine Jerusalem (the Holy Land) prior to it being totally destroyed and then rebuilt in 70 AD.

Madaba City of Mosaicsa can keep mosaic lovers busy for days. Most of those which have been uncovered however, cannot and should not be compared to the Map of Madaba. Nonetheless, they are all beautifully unique, and many of them have helped to trace the area’s heritage all the way back to the Early Bronze Age.

When you’ve seen all the mosaics you want to see, a short journey southwest of the city will take you the region’s famous Hammamat Ma’In thermal mineral springs, popular with tourists and locals alike. The water at the springs is just the right temperature to help you relax, and it’s a rich source of minerals which are believed to have therapeutic properties.

Some tourists spend a few days here to take advantage of the thermal springs and then continue on to Bani Hamida to sample some of the area’s world famous woven textiles. While the area is now best known for its woven products, it was once famous for breeding horses. Like many other parts of Jordan, this region too is steeped in history and well worth a visit.

Explore the Best of Egypt and Jordan

Reading about famous historical sites is one thing, but actually visiting them is a different thing altogether. You can book you tour of a lifetime right now by visiting our Egypt and Jordan Tours page, where you’ll see just one of the many tours we offer that include a visit to Madaba City of Mosaics.