Formally named Musée de Marrakech, the Marrakech Museum is located in the old center of Marrakech. One of the biggest draws of the museum is the building in which it is housed; a beautifully restored palace which was built towards the end of the 19th century, and a stunning representation of classic Andalusian architecture. This museum is best visited on your own while exploring the old medina but we can also add it to any one of our Egypt and Morocco Tours on request. 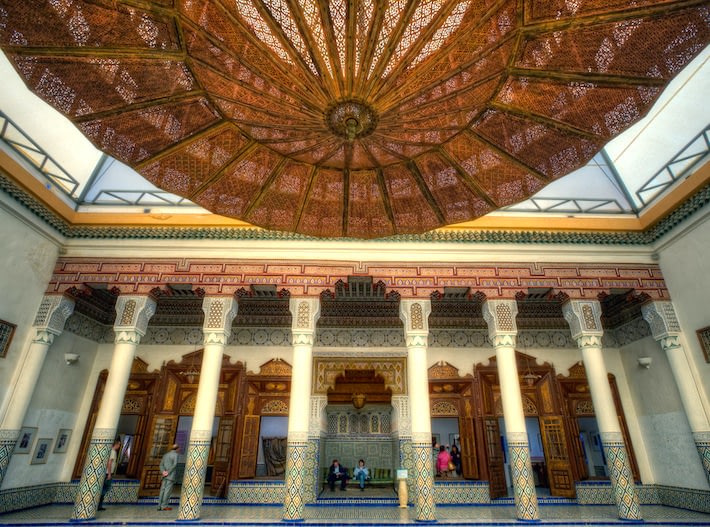 The Marrakech Museum houses a good collection of historical books, pottery and coins representing Moroccan, Islamic, Jewish, and Berber cultures. In addition to the many artifacts on display, the museum also routinely holds art exhibits featuring both old and modern Moroccan art.

It would be misleading to say that the Marrakech Museum is one of the most popular Marrakech tourist attractions because there are better and more exciting attractions in and around the city, but if you are in or near the Marrakech’s old center, which actually is pretty central anyway, then the museum is certainly worth a visit.

Unfortunately, the museum quite often gets bad reviews, but these are almost exclusively from people who were expecting a museum where you can spend several hours looking at an almost infinite number of artifacts.

If you are expecting to see a museum along the same lines as the Egyptian Museum in Cairo, then the Marrakech Museum may end up being somewhat of a disappointment.

On the other hand, if you think you might enjoy strolling around inside an old royal palace looking at a reasonable collection of artifacts that represent four fascinating cultures, then head over to the Marrakech Museum with your camera, and get some incredible photos while you are there.

The abundance of carved cedar wood arches; stained glass windows; beautifully painted door panels, and a vast amount of zellij tile work, all help to provide you with magnificent photo taking opportunities, and that is even before you get started on all the artifacts that are on display.

If you intend booking one of our Egypt and Morocco Tour Packages and you would like us to add this site to your preferred or chosen itinerary, simply let us know.

A Short but Interesting History 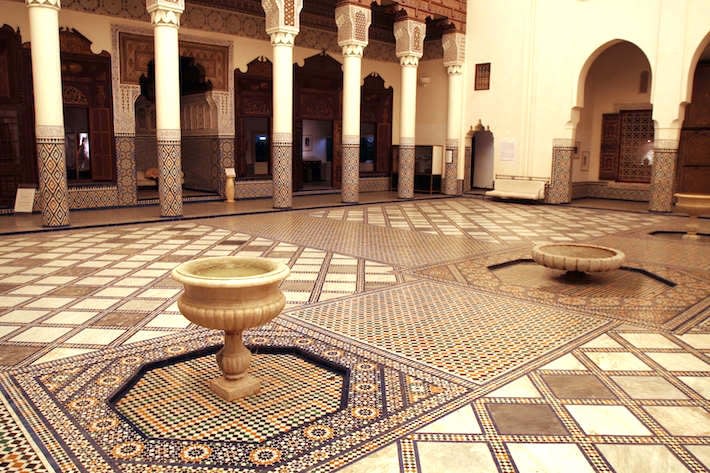 The Marrakech Museum is housed inside the Dar Menebhi Palace which was commissioned by Mehdi Menebhi at the end of the 19th century. Mehdi Menebhi was the country’s defense minister during the reign of Sultan Moulay Abdelaziz’s who ruled Morocco from 1894 to 1908.

On one occasion while Mehdi Menebhi away in Great Britain to receive a medal from the Queen, England, France and Spain decided that they were going to colonize North Africa.

During this process, an autocrat by the name of Pasha Glaoui seized upon the opportunity, and decided to ransack the opulent Dar Menebhi Palace.

Many years later, shortly after Morocco regained independence, the state seized control of the palace, and converted it into a school for girls in 1965; Morocco’s first all-girls school.

Slowly but surely, the once lavish Dar Menebhi Palace inevitably began to deteriorate.

It was only in 1997 that the Omar Benjelloun Foundation began renovating it in an attempt to recapture the building’s original beauty and character. Upon completion of the work, the order was given to turn the palace into a museum and open the doors for the world to see.

While it might not be one of the most thrilling Morocco tourist attractions, long opening hours and a very reasonable entrance fee make Marrakech Museum is a great place to stroll around and admire if you are in or near to the area where it is located.

Some people may find the palace difficult to locate because it is essentially located in a souk. However, if you have difficulty finding it, just ask one of the locals to point you in the right direction.

If you would like to visit the palace, you can check out our Egypt and Morocco tours, although it should be noted that this museum is not featured in all of them.

It can however be added to any of our packages tours simply by letting one of our tour managers know that you would like to visit this site during your stay in Marrakech.

Ben Youssef Mosque – The Mosque that Refused to Die

Saadian Tombs – Splendour Even In Death