Al Fahidi Fort is not only Dubai’s oldest building, but it’s also home to the region’s most famous museum, attracting around 2,000 visitors per day. You can visit both the fort and the museum with any one of our Egypt and Dubai tours. 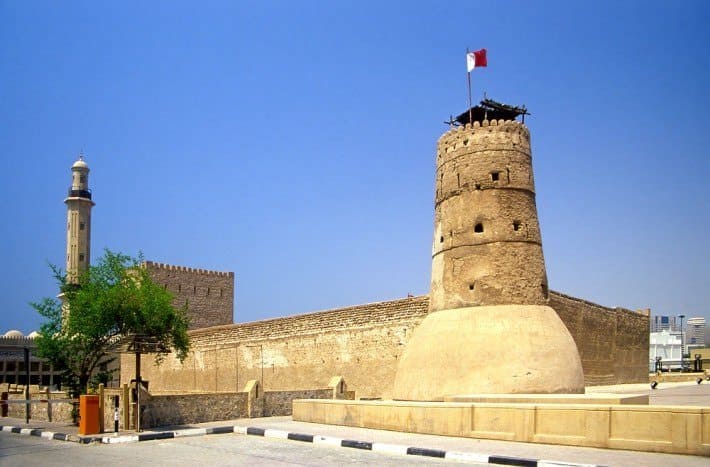 Dubai is one of the seven emirates that make up UAE (United Arab Emirates), although even today, many people mistakenly believe that Dubai is an independent country. Also known as the “Shopping Mall of the Middle East” or the “City of Gold”, Dubai attracts vast numbers of tourists from around the world, and is currently ranked as being the 7th most visited city on the planet. By 2017, the number of tourists arriving annually is expected to reach 15 million, so what is it that draws so many people to the region?

The city of Dubai offers visitors everything they could hope for. It’s safe; clean; modern, and above all, fascinating. It’s a city with a long and colorful history. One of the key attractions in Dubai for travelers, who have an interest in history, is without a doubt the infamous Al Fahidi Fort and Dubai Museum. This is the most renowned and most impressive museum with the United Arab Emirates, and also the oldest building in Dubai. 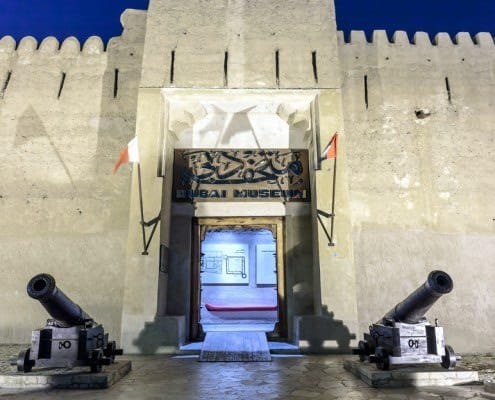 Al Fahidi Fort was originally built in 1787 and the museum was officially opened in 1971 by the ruler of Dubai. During its life, the fort has served a number of purposes and was once also used as a palace. The museum’s primary goal these days is to showcase the traditional way of life in Dubai before the arrival of oil. At present, Al Fahidi Fort attracts around 2000 visitors per day, especially during the high season.

Because of its popularity and its historical significance, we have included a visit to the fort in nearly all of our existing Egypt and Dubai tours.

Visitors can enter the first Al Fahidi Fort gallery by descending down the spiral stairway located at the South Western tower of the fort. The gallery consist mosts of artifacts leading up to the 1960s when oil was discovered. The artifacts on display are both local as well as things which were accumulated through trade with other countries.

The Al Fahidi Fort museum is perhaps best known for its amazing life-size dioramas which await visitors once they step through the door adjoining the gallery. The first diorama for example, gives visitors the sense of standing on the deck of an old traditional dhow where goods are being unloaded to a life-size model of what was once a typical souq found near many rivers and creeks.

Immediately after this, visitors will be taken back in time as they stroll along the diorama featuring vendors (buyers and sellers) and even a wide variety of craftsmen, including carpenters, tailors, iron smiths and etc. A synchronized sound track, along with life-size video footage honestly gives the feeling of being in a real-life souq as they were in years gone by.

The Mosque And The Dessert

Following the souq, visitors will move on to a fascinating model mosque along with a house which is complete with a family. Next up is the very popular desert diorama which gives visitors a feel of how life was once lived in the desert by the Bedouins. Complete with wild animals, a camel and a Bedouins tent full of handicrafts, you’d be forgiven for thinking you have well and truly travelled back through time.

This is the museum’s largest diorama, and is quite frankly an outstanding effort to allow visitors a chance to experience the important role of the regions seafarers. From the building of a dhow to an abundance of sea life, you’ll have no reason not to take scores of pictures.

This is the final diorama on display and depicts a famous archaeological site dating back to around 3000BC in the Al Qusais area. The diorama also includes a number of tombs, complete with an archaeologist and a skeleton that was discovered at the site. As with all the dioramas, there are soundtracks and life-size videos which all add to the making of an unforgettable experience.

After you pass through the last diorama, you’ll enter another gallery dedicated to a number of archaeological finds that relate to various eras throughout the region’s history. Finally you’ll stop at a very well stocked gift shop, where surprisingly enough, prices are incredibly reasonable.

With the gift shop being the last stop, you can now stroll up a winding ramp that leads to the exit which is located on the southern side of the museum. While Dubai has an abundance of tourist attractions, Al Fahidi Fort and Dubai Museum is definitely one which you cannot afford to miss.

Contact us today to find out more about our epic Egypt and Dubai tours or to book your dream trip to these two magical destinations.