A Bahariya Oasis tour is a good way to see much of Egypt’s Western Desert. See a modern archaeological dig, travel to natural wonders and enjoy the many other pleasures of the Bahariya Oasis in Sahara, a place that was once home to dinosaurs and a steamy mangrove forest.

There are five primary oases in Egypt, and between the farthest eastern oasis of Siwa and the man made oasis of Fayoum is the lovely Bahariya Oasis. Many people use this location as a base or starting point for a wider exploration of the Sahara Desert. A Bahariya Oasis tour will usually depart from Cairo, and include some of the most popular Sahara attractions and destinations in the entire region.

For example, a traveler enjoying a Bahariya Oasis tour will be able to view the White Desert and Black Desert after only a short drive through the desert. This will also mean access to the famous “Black Pyramids” and even a stop at the tiny oasis of El Haiz. A day spent traveling in this manner would probably also introduce guests on Egypt desert tours to the remaining Bedouins in the area as well, and many share a memorable meal or barbecue with the large clans.

Bahariya Oasis tours have been occurring with a far greater frequency since 1996, when Egypt’s leading antiquities expert, Zahi Hawass discovered a cache of mummies in the oasis’ necropolis, now known as the Valley of the Golden Mummies.

To date several dozen have been unearthed, and the archeological team anticipates that the area holds around ten thousand burials sites. This has created a spike in the numbers of visitors to the oasis, and has allowed the primarily agricultural Wahati people to turn their attention to tourism.

Visitors enjoying a Bahariya Oasis tour will have a nice range of accommodations to choose from within the town itself, and there are several excellent sites to view from within the confines of the oasis. Guests can explore the palm groves and agricultural areas as well as the rice fields as they head to the traditional viewing locations for the Salt Lake, Black and Crystal Mountains among other sites. 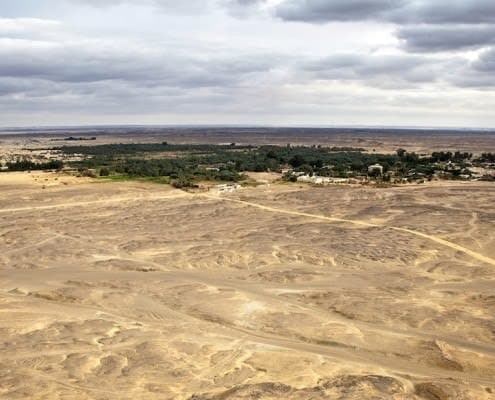 Guests enjoying a Bahariya Oasis tour will notice that this oasis is a particularly more modernized location than other oases in the region, and this is simply due to the construction of a good road that now connects modern Cairo to the remote oasis area.

Unlike other people of oases, the Wahati of the Bahariya have been exposed to the urban culture of Cairo, which is the largest city in the country, as well as one of the largest on the continent. This has clearly influenced certain areas of the oasis and those taking a Bahariya Oasis tour will be able to enjoy the easy access to the region along with the modernized facilities, accommodation and services.

Reserve your Egypt desert tour today and get ready for the ride of your life.