The top 5 must visit cities in Egypt include Cairo, Luxor, Aswan, Sharm El-Sheikh and Alexandria. Other not to be missed towns and villages include Saqqara, Edfu, and Kom Ombo. 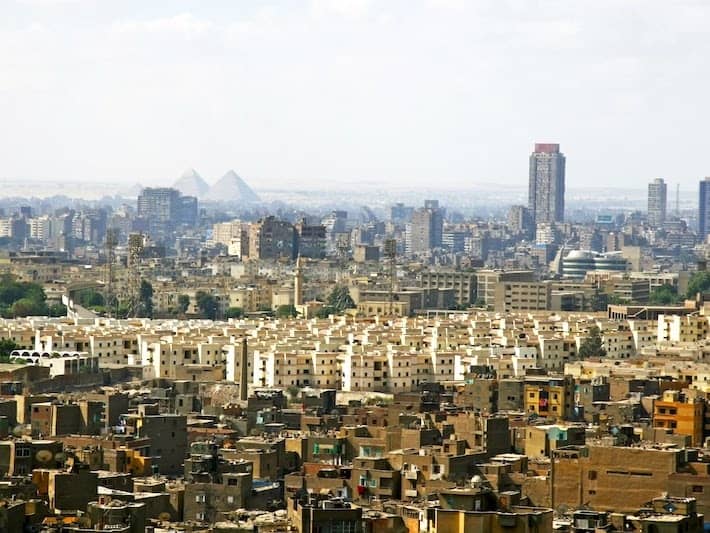 View over Cairo city with the Giza Pyramids in the distance

Must Visit Cities in Egypt

Egypt’s Red Sea coastline is also famous for its vast number of pristine coral reefs and an abundance of marine life that attracts scuba divers from around the world.

So, what are the top must visit cities in Egypt? Let’s take a look…

Giza, Home to the Famous Pyramids and Sphinx

Giza, which is Egypt’s second-largest city, does not have much to offer in terms of tourist attractions, but it is home to the famous Giza Pyramids and the iconic Sphinx. For this reason, it is one of the first cities that first-time visitors head for after arriving in Egypt.

For most tourists, two hours is ample time to visit the pyramids. However, you would like to go inside one of the pyramids, and perhaps go for a short camel ride; you should plan on spending at least three hours at the site.

There is no denying that Cairo can feel a bit overwhelming for some people, and even a bit frightening. With that having been said, it can also be an incredibly fascinating city, and a truly fun city to explore, beginning with the famous Egyptian Museum which is located in Tahrir Square in the very heart of the city.

Cairo’s bazaars are famous, but none are as famous as the bustling Khan el Khalili in a part of the city known as Islamic Cairo. One can literally spend an entire day exploring Islamic Cairo on foot. Besides lots of breathtaking centuries-old Islamic architecture, you can also sample some of the city’s finest street food while exploring this fascinating part of Cairo.

Cairo is also a convenient place to be for visiting other nearby attractions such as the Saqqara necropolis which is home to the famous Step Pyramid of Pharaoh Djoser. The Dahshur Pyramids are also only a short drive from Cairo.

In short, Cairo is definitely one of the top must see cities in Egypt, and especially if you have a bit of an adventurous streak.

Luxor, a City of Ancient Temples and Tombs

Luxor is home to some of Egypt’s most famous temples, including Hatshepsut Temple, Karnak Temple and Luxor Temple, to name just a few. Luxor is also the place where you will find the famous Valley of Kings, an ancient royal burial ground. More than 60 tombs have been discovered and excavated in the valley, including the world-famous Tomb of King Tutankhamun.

Many tourists have described Luxor as being a more fascinating destination then Cairo. If you plan on visiting this part of the country, then we highly recommend that you book a Nile River cruise from Luxor to Aswan. Providing you book a good quality Nile cruise, you will get to see all of the sites mentioned in the previous paragraph and more.

Most Nile cruises also include a visit to the Temple of Horus, as well as a visit to a pair of ancient twin temples at Kom Ombo before reaching Aswan where you will enjoy another sightseeing tour.

Aswan’s most famous ancient site is the breathtaking Philae Temple, but it is certainly not the only attraction in the area. If you are willing to venture a short distance from the city, you will find numerous other lesser known ancient sites.

Aswan, however, is also known for its beautiful Nile scenery which is best appreciated by way of an early morning or late afternoon felucca ride on the Nile. And, if you want to get a taste of rural Egyptian life, a stroll around Elephantine Island definitely won’t disappoint you.

While you are in Aswan, you should also consider a tour to Abu Simbel to see one of Upper Egypt’s most impressive ancient monuments, the rock-hewn temples of Pharaoh Ramses II and his wife, Queen Nefertari, aka the Temples of Abu Simbel.

While Aswan cannot compete with Luxor in terms of historical sites, it is most definitely one of the must visit cities in Egypt.

For an even more relaxing experience, you might want to consider visiting the nearby coastal town of Hurghada. Both of these destinations offer a wide selection of activities to keep people of all ages amused and occupied, including aquatic activities such as windsurfing, snorkeling, and world-class scuba diving.

Sharm El Sheikh is a very hip sort of city with an abundance of roadside bistros and cafes, and also an incredibly vibrant nightlife.

If time permits, be sure to check out the amazing Monastery of Saint Catherine which is located at the foot of Mount Sinai, a very popular hiking destination.

If you are wondering where to visit in Egypt, Sharm El Sheikh is definitely one of the top must visit cities, regardless of your age or your budget.

Alexandria, Gem of the Mediterranean

Alexandria is located on Egypt’s northern Mediterranean coastline. Originally founded by Alexander the Great, Alexandria is today Egypt’s third largest city. Despite being the country’s third-largest city, the city tends to have a far more relaxed atmosphere. It is also considered to be one of the country’s safest cities in terms of crime.

Alexandria is often referred to as the Bride of the Mediterranean, and is often described as being Egypt’s most European city. Unfortunately, it does not have much in the way of historical monuments, although it does have several attractions which are well worth a visit. Some of the top attractions include the ultra-modern Bibliotheca Alexandrina, Pompey’s Pillar, the Qaitbay Citadel, and some ancient Roman catacombs.

The city’s beaches certainly cannot compete with those on Egypt’s Red Sea coast. However, this can actually be advantageous because Alexandria’s beaches are never as crowded as what they frequently are at other coastal cities like Sharm El Sheikh. Another great feature of the city is its many old-world-style restaurants and cafes.

If you have already visited the other must visit cities in Egypt which have been mentioned in this post, then you should definitely consider a trip to Alexandria, even if it’s only for 2 or 3 days.

A Dream Vacation with Only a Few Clicks of Your Mouse

At Egypt Tours Plus, we have a truly epic range of high-quality Egypt private tours to suit all tastes and budgets. All of our Egypt tour packages can also be customized to fit your needs exactly. Alternatively, our team of travel specialists can work with you to create your very own unique tailor-made tour from scratch.

Contact us now to begin planning your dream trip to Egypt or to book your once-in-a-lifetime Egypt adventure today.