The Nile River in Egypt is the lifeblood of this ancient civilization. The ancient Egyptians prospered because of it, modern Egypt is dependent upon it.

This massive north flowing river, measuring 6650 kilometres (4,132 miles) is the longest river in the world. It is located in North-Western Africa and extends from Khartoum in Sudan to the Nile Delta located in northern Egypt.

The Nile River in Egypt flows through desert more than it does through any other landscape. Annual flooding deposits a rich layer of soil near the banks of the Nile. The Egyptians have depended upon this cycle and the arable land it creates since the times of their ancient ancestors. 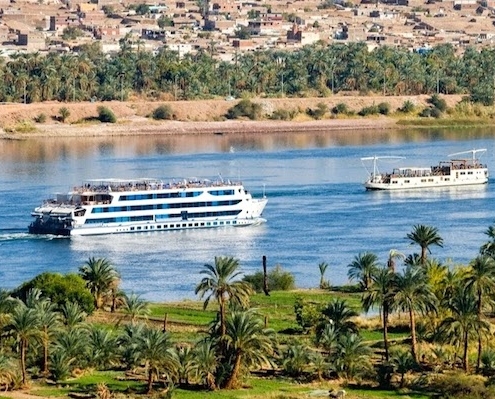 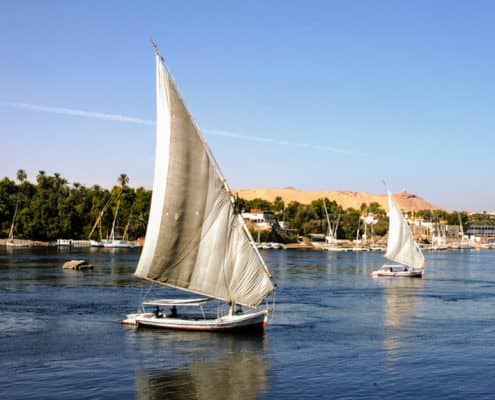 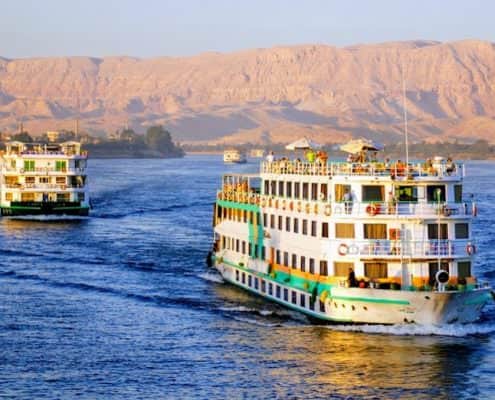 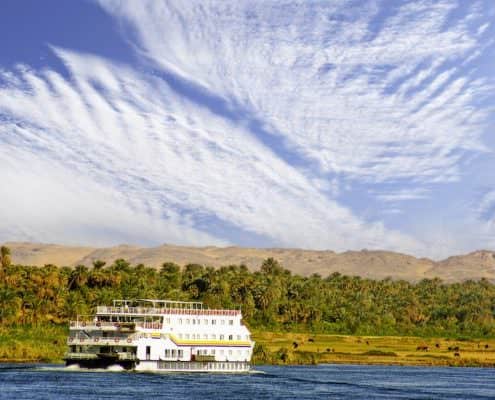 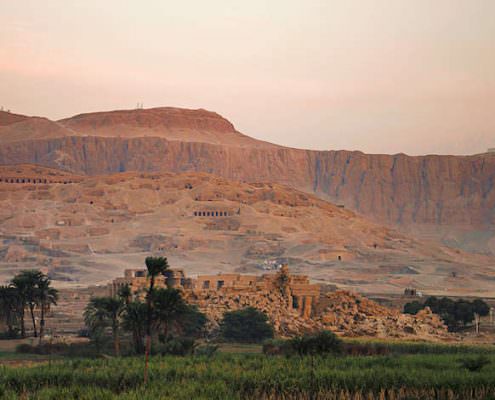 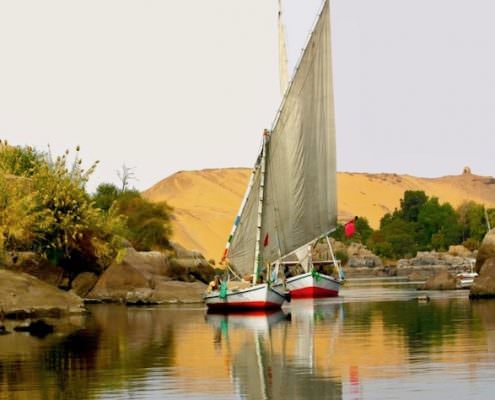 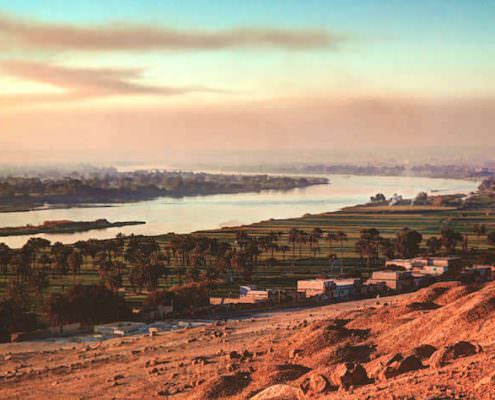 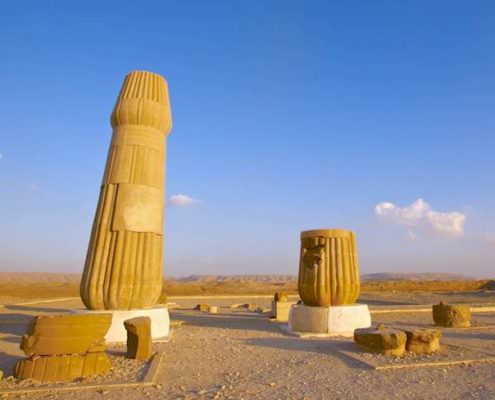 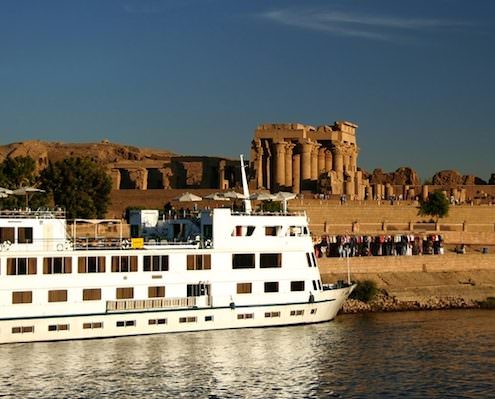 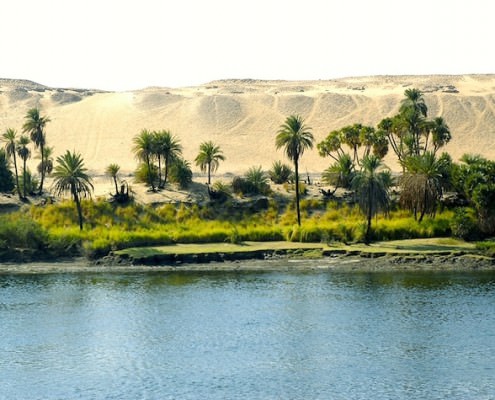 The Importance of the Nile River in Egypt 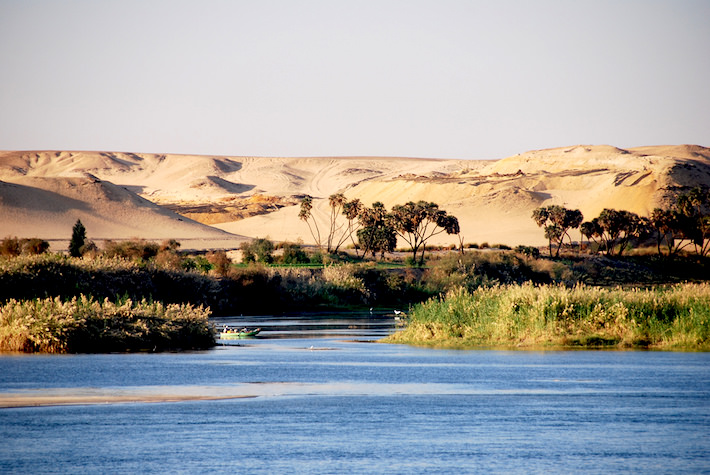 In ancient Egypt, when people first began to settle along the banks of the Nile and to evolve from hunters and gatherers to settled, subsistence agriculturalists, Egyptians developed the written language, religion, and institutions that made it the world’s first organized society.

Through pharaonic Egypt, Africa claims to be the cradle of one of the earliest and most spectacular civilizations of antiquity.

The Fall and Rise of the Nile

One of the unique features of ancient Egyptian Nile River Valley civilization was the bond between the Nile and the Egyptian people and their institutions. The Nile was responsible for the great productivity of the soil, because it annually brought a copious deposit of rich silt from the monsoon-swept tableland of Ethiopia.

Each July, the level of the Nile began to rise, and by the end of August, the flood reached its full height. At the end of October, the flood began to recede, leaving behind a fairly uniform deposit of silt as well as lagoons and streams that became natural reservoirs for fish. By April, the Nile was at its lowest level. Vegetation started to diminish, seasonal pools dried out, and game began to move south. Then in July, the Nile would rise again, and the cycle was repeated.

Because of the fall and rise of the river, one can understand why the ancient Egyptians were the first people to believe in life after death. The rise and fall of the flood waters meant that the “death” of the land would be followed each year by the “rebirth” of the crops. Thus, rebirth was seen as a natural follow-up to death. Like the sun, which “died” when it sank on the western horizon and was “reborn” in the eastern sky on the following morning, humans would also rise and live again.

A Revolution in Food Production

Sometime during the final Palaeolithic period and the Neolithic era, a revolution occurred in ancient Egypt Nile River food production. Meat ceased to be the chief article of diet and was replaced by plants such as wheat and barley grown extensively as crops and not gathered at random in the wild.

The relatively egalitarian tribal structure of the ancient Egyptian Nile River Valley broke down because of the need to manage and control the new agricultural economy and the surplus it generated.

Long-distance trade within ancient Egypt, a high degree of craft specialization, and sustained contacts with southwest Asia encouraged the development of towns and a hierarchical structure, with power residing in a headman who was believed to be able to control the Nile flood. The headman’s power rested on his reputation as a “rainmaker king.” The towns became trading centres, political centres, and cult centers.

Egyptologists disagree as to when these small, autonomous communities were unified into the separate kingdoms of Lower Egypt and Upper Egypt, and as to when the two kingdoms were united under one king.

The Unification of the Two Lands

Nevertheless, the most important political event in ancient Egypt Nile River history was the unification of the two lands: the Black Land of the Delta, so-called because of the darkness of its rich soil, and the Red Land of Upper Egypt, the sun-baked land of the desert. The rulers of Lower Egypt wore the red crown and had the bee as their symbol. The leaders of Upper Egypt wore the white crown and took the sedge as their emblem. After the unification of the two kingdoms, the pharaoh wore the double crown symbolizing the unity of the two lands.

The chief god of the Delta was Horus, and that of Upper Egypt was Seth. The unification of the two kingdoms resulted in combining the two myths concerning the gods. Horus was the son of Osiris and Isis and avenged the evil Seth’s slaying of his father by killing Seth, thus showing the triumph of good over evil.

Horus took over his father’s throne and was regarded as the ancestor of the pharaohs. After unification, each pharaoh took a Horus name that indicated that he was the reincarnation of Horus.

According to tradition, King Menes of Upper Egypt united the two kingdoms and established his capital at Memphis, then known as the “White Walls.” Some scholars believe Menes was the Horus King Narmer, whereas others prefer to regard him as a purely legendary figure.

The Emergence of a Centralized Government

With the emergence of a strong, centralized government under a god-king, ancient Egypt’s nascent economic and political institutions became subject to royal authority. The central government, either directly or through major officials, became the employer of soldiers, retainers, bureaucrats, and artisans whose goods and services benefited the upper classes and the state gods.

In the course of the Early Dynastic Period, artisans and civil servants working for the central government fashioned the highly sophisticated traditions of art and learning that thereafter constituted the basic pattern of the ancient Egypt Nile River pharaonic civilization.

August 16, 2018
Spoil yourself with a luxury Nile cruise and stay in Egypt for 15 days of unstoppable fun and adventure, and leave with memories that can never be erased.

August 15, 2018
Enjoy a fairytale vacation with our 12-Day Nile Cruise and Sharm El Sheikh Holiday; a masterfully structured tour that really does have it all.

April 5, 2017
Lose yourself in Cairo; rediscover yourself on the Nile, rejuvenate yourself in the Red Sea. An epic 12 Day Cairo, Nile cruise and Red Sea stay.

April 13, 2015
Discover the ultimate historical attractions in Cairo; visit Luxor and sail to Aswan in absolute style with a 10 Day Luxury Nile cruise and Cairo tour.

April 12, 2015
Give yourself the holiday you deserve with premium high quality round trip Nile Cruise and Caro Package; a travel experience that’s truly beyond words.

April 4, 2015
Enjoy non-stop sightseeing in unrivaled elegance and style with our high caliber 8 Cairo to Abu Simbel Tour with Nile Cruise from Aswan to Luxor.